Willy's demise is as devastating as ever 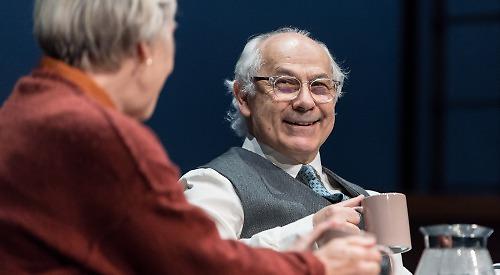 WE think a lot has changed in 70 years, but really it hasn’t. Arthur Miller’s devastating critique of the American Dream myth shows it still thrives — and no more so than in Trump’s world.

Death of a Salesman was written in the Forties but it speaks just as loudly to us today — it’s rare that a Miller play doesn’t. It’s a modern classic and its nearly three hours leaves us wrung out with the futility of it all.

But if we want a lesson on why we’re where we are at the moment, then this serves well. Get a ticket!

Abigail Graham’s direction gives us a bleak landscape in which hope still reigns against reality until it inevitably dies. The set is a dull grey four walls with a battered fridge in one corner, a bed in the other and a table and chairs in the centre. Only the configuration changes — and only once.

This has the effect of sucking the aspiration from the characters. No matter how hard they try they’ll never get beyond this. One criticism: there’s a neon-lit sign running across the top of the stage with the legend. “Land of the Free.” Was this perhaps too obvious?

Anyway, we are left in no doubt that the message is in Forties America, as today, you are free to fail and most people do. Willy Loman — in an outstanding virtuoso performance from Nicholas Woodeson — lives in his modest New York home with his wife and two grown boys.

He’s a salesman and he tramps the towns and cities of New England just about managing to stay afloat, hoping for the one big deal that will make him. It never comes.

Woodeson is small in stature which helps in this part because Loman is a small man in all senses. He’s testy, loud, resistant, proud beyond reason and the epitome of the little man fighting the machine. He can never win because he doesn’t have the temperament or the skills.

Instead he pursues the idea of the American winner while losing all the time — his home, furniture, fridge, car and life insurance are all behind on payments and at one point he makes the ironic comment that he would like to actually own something which still works by the time he’s finished paying for it.

This is Miller’s genius: he presents us with a man who is suckered by his own game — selling. Someone sold him all those things while he sold his own goods.

He gets to 60 and the sales dry up, his contacts have moved on and he no longer gets any commission. He’s forced to beg for a job and then for handouts. And throughout there’s the rough but ethereal presence of his brother urging him to take the risk and make his fortune in Alaska. Anyone can make a fortune in America it seems — but very few actually do.

So he passes on his ambition to his son — or tries to. The end sees the sad sight of Willy denied by his son, then dying of a heart attack. Finally the insurance pays out and everything is settled — at what price?

This is a demanding play at no matter how it’s produced, but its parallels with modern America and quite possibly post-Brexit Britain are clear: everyone has a chance but the winner will be the one with the biggest fists.