Flashes of lightning that show Blessed has cracked Christie 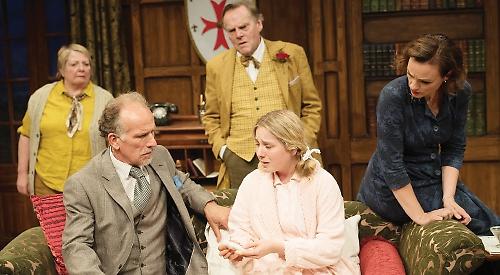 THUNDER, lightning, a crazy but strangely relevant soundtrack, jokes. Yes, Brian Blessed is back at the Mill at Sonning with another Agatha Christie.

When the veteran actor and explorer came to the Mill a year ago to direct The Hollow he was learning the craft to a certain extent. Spider’s Web shows he’s now got a firm grasp of it.

Spider’s Web is described as a comedy-drama but we should add murder mystery and farce into the mix because it manages to be all three and Blessed’s surefooted direction makes sure it sustains those formats.

It’s a long play but it never flags. There’s always a plot development, a laugh, or a surprise to keep us interested, and Blessed has chosen his cast well.

Melanie Gutteridge as Clarissa Hailsham-Brown drives it on with a central performance which is witty, charming and warm. She sets out to disguise a murder to protect her stepdaughter and that leads to both farce and murder mystery, often at the same time. It’s quite a convoluted plot even for Christie but it all hangs together without too much telling and a lot of showing.

Farce and crime drama rely upon deceit and being found out so Christie is able to tap that font twice over, which makes for an entertaining mix.

And of course farce and murder mysteries rely heavily on a variety of doors, windows, cupboards and secret entrances, which add to the fun and energy of this piece.

Inevitably an inspector arrives to sort it out and Noel White returns as the Christie sleuth of choice for Blessed. It’s a good choice: he has energy and authority and plays a neat good cop-bad cop routine with a clown of a constable played by Alexander Neil, who also doubles as the murder victim.

What sets this apart is the knowing irony of it. When Blessed directed The Hollow he was still playing around with ideas but now he’s sifted out what works, including a funny soundtrack featuring The Laughing Policeman and the Dick Barton theme.

Add in a couple of cracks of thunder and lightning flashes at the beginning, the signal of foreboding in the middle of the last century but now a knowing joke, and we know from the start that we shouldn’t take this too seriously.

While Gutteridge underpins the show with her magnetic performance, George Telfer plays a strong upstanding authority figure in whom we trust. And watch out for what in former decades would have been a matinee idol in the making: Luke Barton playing Jeremy Warrender. George is funny and compelling.

The excellent ITV remakes of the Marple series and Poirot have shown what can be done with what might once have been deemed straight drama without too much characterisation. Brian Blessed now has a grip on the idea which may take it further still.