Victorian venue's getting a new roof as fund-raising target hit 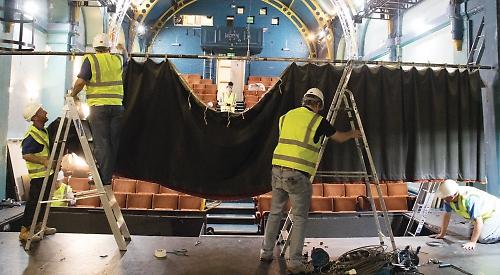 A £500,000 fund-raising drive to replace the leaking roof of Wallingford’s historic Corn Exchange has just hit its target — thanks to an injection of funds from South Oxfordshire District Council.

The authority’s community grants committee has awarded £170,000 for the work to the Grade II-listed building, which will see the original glass roof from 1856 make way for a new one that doesn’t leak in wet weather.

But in a further boost for theatregoers, the venue will also get new stage facilities and improved heating and ventilation in the auditorium.

Since the roof appeal was launched in January, a team of enthusiastic volunteers has been working long hours to find ways to raise the funds.

Grant applications have been sent to numerous charities and trusts, many of which have resulted in substantial donations.

Events such as a barn dance, quiz evening, garden party and a Marathon Show have steadily boosted the amount, helped too by bucket collections after cinema screenings and Sinodun Players’ live shows.

Members of the public have also donated via the online JustGiving site or by placing donations in the foyer collection box when passing the building.

Corn Exchange marketing director and fundraising committee member John Evans said: “We are very, very pleased. The grant from the district council has guaranteed that our roof project can go ahead, so a big thank you to the grants committee.

“We’re grateful too for all the other donations we have had, both large and small, especially the elderly lady who came into the foyer to put £5 in the collection box and apologised that it was all she could afford. That really touched us all.”

The venue in Market Place is owned by the Sinodun Players’ charity and is run entirely by volunteers. Work on the roof is due to begin shortly and is estimated to take around three months ahead of a grand reopening in the autumn.

Elizabeth Gillespie, the council’s cabinet member for licensing and grants, said: “We are delighted to support the Corn Exchange and the Sinodun Players so they can continue running events and entertainment programmes.

“The investment planned will not only protect the Corn Exchange’s heritage and history but will introduce sustainable materials to guarantee its future as a focal point for the local community.”

Volunteers have been busy removing equipment in preparation for the work to begin.

This has included emptying the costume store, dismantling the cinema screen, removing curtaining and taking down scores of stage lanterns from ceiling gantries.

A human chain was set up to move the various items from the theatre into storage.

Wardrobe items included huge numbers of military uniforms — “enough to start a war”, according to one volunteer — while auditorium seats have been taken out and sent away for refurbishment.

Mr Evans said: “The operation was extremely well organised and went like clockwork. I don’t think many of the volunteers knew we had so much stuff!”

Meanwhile, fundraising is set to continue and a series of special events will be included in the new season’s programme.

Mr Evans added: “We have enough cash for the immediate work but we need to top up the Corn Exchange reserves for ongoing maintenance.

“We also plan to do some jobs that it’s more economical to do now rather than leaving it till later.”