Brexit, botox bring land of the reprising sun bang up to date 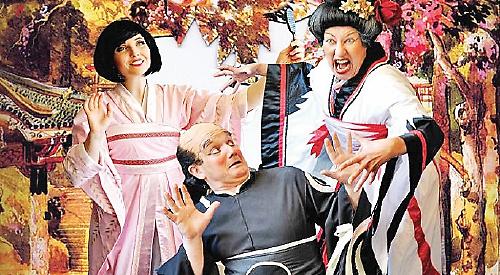 PUTTING on three comic operas over three nights, the National Gilbert & Sullivan Opera Company presented The Mikado for our delectation.

With sublime singing harmonies and orchestral accompaniment alongside sumptuous costumes and scenery, all complementing this cheerfully compelling Victorian satire, this was packed full of entertaining absurdities and little moments of happiness.

In the fictitious Japanese town of Titipu, poor but handsome second trombonist Nanki-Poo is in love with Yum-Yum, who he wishes to marry, but she is a ward of former tailor, Ko-Ko.

The Mikado (Japanese Emperor) has decreed flirting to be a capital crime, for which Ko-Ko has been sentenced to death.

However, to thwart the decree, the authorities appointed Ko-Ko as Lord High Executioner and he is effectively in checkmate as he cannot execute himself.

As the town’s officials refused to serve under ex-tailor Ko-Ko, so nobleman Pooh-Bah swept in to take up all their posts (and accompanying salaries) and is open to being “grossly insulted” to grease the wheels of bureaucracy.

To top it all, the city is at risk of being downgraded to “village” status unless someone is executed within the month. Then Nanki-Poo reveals his real identity to Yum-Yum — that he is the son of the Mikado — to support his marriage proposal.

When the Mikado sweeps into town with his son’s former stalker/suitor Katisha, she still has designs on Nanki-Poo and chaos ensues.

With wonderful melodies and voices throughout, the tongue-in-cheek nature of the piece shone and Simon Wilding (Pooh-Bah), Richard Gauntlett (Ko-Ko) and Mae Heydorn (Katisha) were particularly entertaining in portraying their outlandish characters.

With booming tones and high voltage emotions, the ensemble took us on their journey of romance, comedy and the constant overhanging threat of execution, with some style.

I particularly enjoyed the rendition of Behold the Lord High Executioner and it’s still going round in my head.

In addition, things were brought bang up to date with I’ve Got a Little List — bringing us people who should not be missed and topical references to botox and Brexit.

This talented cohort was resplendent in elaborate kimonos and shawls, and the make-up and special effects were extraordinary — from Katisha’s high bun and
Ko-Ko’s brows to the Mikado’s scary eyes.

As the opera reached its denouement in a most satisfactory way, a good time was had by all, with the whole piece being beautifully presented and thoroughly enjoyable.