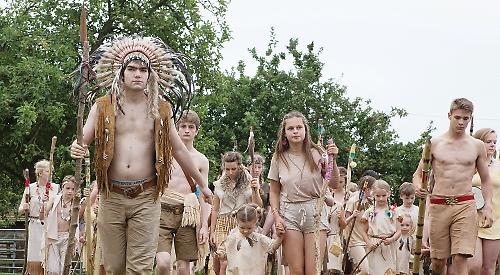 THERE must have been a positive creative vibe around the Stonor Valley last week.

By kind invitation of the Stracey family of White Pond Farm, Stonor, Hiawatha was staged in a teepee in a field — a brilliant idea as the audience was immediately transported to times of long ago, to the ways of Hiawatha and the tribes of North American Indians.

Imagine the effect of a Red Indian tribal chief in full feather headdress followed by his tribe heading straight across the field towards you accompanied by loud drumming and into the the claustrophobic space of the teepee. Up close and personal or what?

And that was how this production continued — the young cast did not let up the tension for one moment. The audience, seated on straw bales and cushions on the grass, could not fail to be completely involved with the action.

The cast took us through the early life of Hiawatha cleverly portrayed by using actors small, medium and larger (Lottie Bradley, Oliver Clark, Connor Brown) up to his wooing of Minnehaha (Isabella Alexandrou/Evie Amos).

The peace pipe scene gave us some insight into the tribal squabbles and politics of the day, while the scary West Wind Mudjekeewis left us in no doubt as to the tribal beliefs of the time and their fear of their gods of nature.

Mudjekeewis (Sam Beaumont with Robin Nice as a fearsome bear), swirling in swathes of white muslin representing the power of the wind, convinced us that he was a force to be reckoned with.

And so it turned out, as he fathered Hiawatha with the seductive Wenonah (Sophie Print) leading to big father-son trouble later in Hiawatha’s life and a brilliantly staged and choreographed fight between them. Such is one’s coming of age, it seemed — along with Hiawatha falling in love with Minnehaha. Their wooing and love-making made very clear the passion of their relationship. Even old Nokomis (Emma Dodd) grows to love Minnehaha.

The wedding feast of Hiawatha and his Minnehaha was a joy — much feasting and merriment, more than ably helped along by the talented Acorn musicians, who played very effectively throughout.

Another piece of notable staging was the burial ceremony of Minnehaha — yes, his beloved dies — cleverly lit to be sad and sombre, and staged to have her lifted on a bier of stakes and carried to her resting place.

There was so much imaginative use of limited props — to create a birch canoe, the burial bier and more — and the choreography was clever too. The cast truly gave us the sense that Hiawatha’s canoe was streaking through the water and that battles were fiercely fought.

In this they were aided throughout by Anya Fox’s subtle lighting design.

Hiawatha was truly an ensemble piece and it would be invidious to shine a spotlight on any one performer.

The success of every Acorn production owes much to their talented artistic director, Gail Rosier, and her team — especially the talented young director of this Hiawatha, Rachel Wojcicki.

With its strong history of superbly imaginative productions, Acorn never fails to impress. Watch out for their next production — they can be found online at www.acornmusictheatre.com