Verne's worldly tale is a feast of storytelling, circus and slapstick 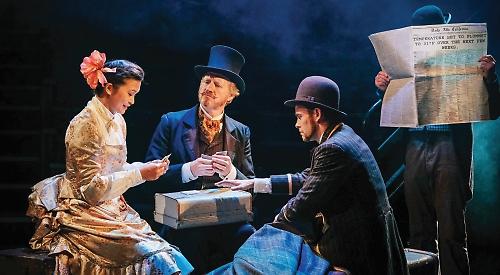 Around the World in 80 Days | Oxford Playhouse | Tuesday, July 25

DOES Jules Verne’s classic satire on British manners get a full airing? Pretty much, save for a hot air balloon — but we didn’t seem to miss it.

Does it give a round night’s entertainment? Oh yes, although it’s doubtful Verne ever foresaw the events on the Playhouse stage.

We need to think of this as Around the World in 80 Days with knobs on — and the biggest knob of all is the hilarious Michael Hugo as Passepartout.

This isn’t so much an episodic retelling of the novel as a high-summer pantomime with acrobatics, dancing, truly excellent remote stage fights and a wry look at the way the British once viewed the world — and may still do in isolated pockets.

Hugo shines through it all in a very French way — slightly humble, slightly mocking, very worldly and incredibly athletic.

The story is never lost in the high-jinks, but while it runs as a continuous thread through the show it does sometimes sag under the weight of the add-ons like a 10-minute circus routine and a five-minute opening to the second act comprising only Hugo talking to the audience and occasionally playing a ukulele. There is no doubt Hugo’s Passepartout is the centrepiece. He dominates everything when on stage, which is most of the time.

Perhaps the director, Theresa Heskins, wanted to milk his talents as much as possible, but the result sometimes is overlong scenes.

On the other hand, the pace and invention which shows itself for most of this show is the sort of thing to leave you breathless and every audience member could be seen with a beaming smile on their face as they left — and that tells a story.

The formalities of the plot: stiff, rich and upper class Phileas Fogg takes a potentially ruinous bet at his gentlemen’s club that he cannot travel round the globe in 80 days. We know what happens afterwards — and if some don’t then I won’t spoil it by telling you.

His new manservant, Passepartout, a worldly Frenchman, acts as his factotum and guardian as the adventures unfold — a relatively uneventful journey to France, then to Italy and Brindisi, where things start to ramp up, a dangerous visit to Bombay, a broken rail journey to Calcutta picking up a future wife along the way, passage to Hong Kong, then Japan, on to San Francisco, across by rail and other means to New York and a busy sea return to Liverpool.

It’s the irony-saturated way the story is told which makes it so enjoyable — that, and the sheer physicality of the cast as they become rail carriages, ships, an elephant, then fighters, dancers and proper speaking characters.

The stage consists of packing cases arranged against a backdrop of the world as it was known to our 19th century ancestors — covered in pink.

There is nothing that money or an Englishman’s word cannot buy, and there was a time when this nation bought into that.

Now we look at it and it seems like another country — save for the time when the passports are produced for the first time. No one makes any mention of it, but they are EU burgundy passports. A funny touch.

What a combination of storytelling, circus and slapstick!