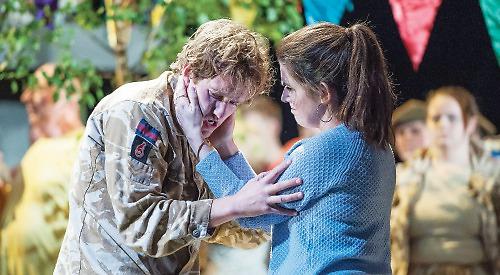 The opera, composed by Roxanna Panufnik with a libretto by Jessica Duchen, is an extraordinary piece of work involving more than 180 performers on the stage and in the pit.

Karen Gillingham, the festival’s creative director of learning and participation, was responsible for bringing together the community which comprised the adult chorus, primary company and youth company.

The ranks of performers, all of whom were auditioned, included pupils from local schools, women from a local refuge and some armed forces veterans.

Despite looking very much at home and most definitely enjoying their experience, many of them had never been on a stage before now.

There were also professional soloists taking the lead roles and the Garsington Opera Orchestra, integral to any Garsington production, was conducted by Douglas Boyd.

Seated in the orchestra were a number of young students for whom Roxanna had written specific parts to be played alongside the professionals, giving them too their first experience of performing in an opera.

As an introduction to the evening Karen invited a range of performers to the stage and questioned them about their experience of taking part in the collaborative venture.

This was an entertaining way for the many parents, grandparents, and siblings in the audience to understand the opera’s context and to hear about the intensive rehearsal schedule over the past months.

The story considers the power of love during wartime and looks at the impact of war on military families today. It also uses some of Siegfried Sassoon’s war poems at key points in the opera.

Sassoon was a regular guest at the original Garsington Manor and by coincidence his great-nephew Stephen Bucknall was singing in the chorus.

From the outset, the combined forces of Roxanna Panufnik and Jessica Duchen proved to be a powerful match.

The libretto is moving and had the audience engrossed in the development of the characters’ lives over several years from start to finish.

The music is stirring — by turns it is lyrical, strong and beautiful with haunting themes repeated in different guises. The opening number, “The Silver Birch grows tall and strong” — a real silver birch tree was on stage — with expressive hand gestures from the younger chorus, was reprised as the finale for full company.

There were impressive performances from all main characters, not least young Maia Greaves as Chloe, who sang as if she owned the stage and with a confidence well beyond her eight years.

Sam Furness as a central character, Jack, who signs up against his parents’ wishes, was a strong tenor in the heroic mode. Mezzo-soprano Victoria Simmonds was splendid all round as Jack’s mother Anna, while Sarah Redgewick as Jack’s schoolteacher Mrs Morrell was particularly stunning in her high register.

Equally outstanding, though, was the movement on stage — in particular the transition into part two, in which the young soldiers experience tough training.

We saw a wonderful marching routine, everyone thoroughly drilled to be absolutely in time and all to the accompaniment of a single snare drum.

Clever, atmospheric lighting brought to life the scenes of war and terror.

Altogether this was a marvellous, inspiring production and one which will hopefully be enjoyed by many audiences to come.