Fund-raising drive to continue as work to replace roof begins 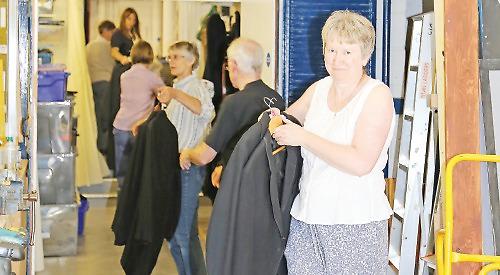 WORK has now begun to replace the leaking glass roof of Wallingford’s historic Corn Exchange — but more cash is needed to provide additional facilities and to refurbish the theatre, writes Carol Evans.

Volunteer fund-raisers recently achieved their original £500,000 target but, taking additional costs into account, they now estimate that a further £100,000 to £150,000 will be required.

Corn Exchange marketing director and fundraising committee member John Evans said: “We currently have £540,000 in actual funds or pledges to cover the immediate requirements, which includes the new roof, new heating and ventilation.

“But we need more to finish the project and bring the theatre up to a high specification. We plan to replace the carpets, decorate the auditorium, refurbish the seats and install special lighting that will show off the building’s original Victorian features.

“We would also like to replace the lighting gantries with electrical winches so that we can set up shows quickly and safely.”

Mr Evans added that the results of several grant applications to charitable trusts were expected and various fundraising events would be organised over the coming months, with a series of special events being included in the new season’s programme.

He said: “We have enough cash for the immediate work but we need to top up the Corn Exchange reserves for ongoing maintenance.

“We also plan to do some jobs that it’s more economical to do now rather than leaving it till later.”

The Corn Exchange, in Wallingford’s Market Place, closed last month and is due to reopen in the autumn.

However, the foyer is open for coffee and cakes every Friday and Saturday from 10am to 2pm.

Members of the public can take a look at how work is progressing through a viewing panel at the top of the auditorium stairs.

Prior to the work getting under way, volunteers got busy removing stacks of equipment from the building.

This included emptying the costume store, dismantling the cinema screen, removing curtaining and taking down scores of stage lanterns from ceiling gantries.

A human chain was set up to move the various items from the theatre into storage.

Wardrobe items included huge numbers of military uniforms — “enough to start a war”, according to one helper — while auditorium seats have been taken out and sent away for refurbishment.

Mr Evans said: “The operation was extremely well organised and went like clockwork. I don’t think many of the volunteers knew we had so much stuff!”

The Corn Exchange is owned by the Sinodun Players charity and is run entirely by volunteers.

An appeal to raise an initial £500,000 was launched in January, the target being reached last month following the announcement a £170,000 grant from South Oxfordshire District Council.