Romantic theatre lover proposes on stage in front of cast 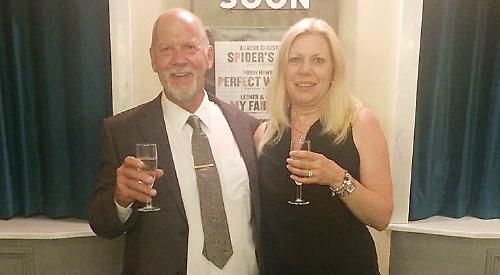 A COUPLE became engaged at the end of a performance at The Mill in Sonning on Saturday.

Mike Charman popped the question to Heather after the performance of Agatha Christie’s Spider’s Web.

He arranged the proposal with the award-winning theatre after finding out his partner had bought front row tickets for the show. After the audience had applauded the performance, 58-year-old Mr Charman stepped into the spotlight.

Afterwards, he said: “Heather had booked the tickets and we were in the front row so I thought it would be an ideal time.

“It was a good opportunity to be close to the action and involve the actors. We’re both on our second marriages so I wanted to make it unique. It was amazing. The cast on stage when I proposed then all came over to congratulate us. I think Heather was in shock at the time but she’s delighted.”

The couple, who live in Ash Green, near Aldershot, visit the theatre about five times a year. Mr Charman said: “We really enjoy the experience. It’s an intimate theatre, a very warm and welcoming place.

“ It’s a whole experience, with a three-course dinner, the performance and drinks in the bar afterwards if you wish.”

He said the couple planned to marry next year.

Sally Hughes, managing director of the theatre said: “We were very happy to help out one of our regular customers for this special moment. Everyone at The Mill wishes the couple the very best for their future together.”

• The Mill is bidding to retain the title of the UK’s most welcoming theatre in the 2017 UK Theatre Awards.