Story of Aslan, the White Witch and Mr Tumnus transported us 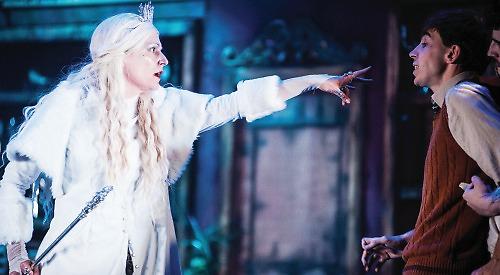 The Lion, the Witch and the Wardrobe | South Hill Park, Bracknell | Friday, August 18

FOR pure, delightful escapism during the summer holidays, and a chance to enjoy a picnic alongside the action in the grounds of South Hill Park, this is one story not to miss.

With fingers crossed that the sun would stay out, having had thunder and hailstones earlier in the day, we settled into the Wilde Theatre before being taken on a journey into another world as unpredictable as the British weather.

As we travelled with the four children, wartime evacuees Lucy, Edmund, Peter and Susan — played convincingly throughout by Amber Lilly Payne, Jack Fairey, Sam Gillett and Ally McEnhill — to a mansion with a friendly professor and a stern housekeeper who believes that children should be neither seen nor heard, they found plenty to explore in their new abode.

In a grand laboratory with a spiral staircase and lots of interesting nooks and crannies, the new residents caused havoc for the staff, to the sound of some wonderful upbeat melodies from the era.

Then, after a game of hide and seek, first petite Lucy and then feisty Edmund stumbled through the fur coats in the back of an old wardrobe into the mysterious world of Narnia and their adventures with forces light and dark really began.

The appearance of the ornate wardrobe, with a design reminiscent of the creatures living in the world hidden within, was accompanied by Beethoven's wonderful Moonlight Sonata, which was a clever form of punctuation, changing the pace and letting its importance sink in.

Upon stepping into Narnia, Lucy took tea with Mr Tumnus the faun, while the White Witch extended her spiritual tendrils to entice Edmund to the dark side with some Turkish delight.

The children were soon to discover that Narnia was trapped in a state of being forever winter but with no Christmas and that it would fall to them to free this land.

As if by magic, various parts of Victoria Spearing's carefully crafted set metamorphosed into sleighs, statuesque paintings and a sinister stone table — in addition to sparkling snowfall and crystal-like raindrops.

The scenery was complemented by Ann Thomson’s costume creations for the White Witch and her coterie — Aslan the lion, Mr Tumnus, Mr and Mrs Beaver and a host of others. Caroline Loveys portrayed a marvellously cranky, bitter and evil White Witch, while Chris Lyne brought out a pensive, wise and loving Aslan.

Director Joe Malyan and assistant director Max Puplett coaxed the magic out of a cast who were happy to oblige and the audience — made up of people of all ages — soaked it all up.

Our sojourn into the gardens was refreshing and fun — walking out into sunshine with a brief but dramatic rain shower and a nearby rainbow appearing at just the right point to suit the play, as if to order.

Then as the story reached its denouement, from terror and sadness to sword fights and order being restored, the camaraderie of the team shone through.