TV mentalist's back on stage with greatest hits 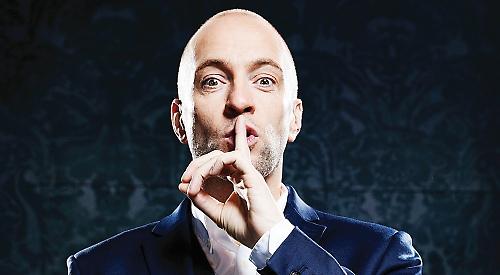 HE wasn’t supposed to be touring this year, but fans of the illusionist Derren Brown will be pleased to see him hitting the road again, writes Matthew Wilson.

The show in question, Underground, will see him play the 1,800-seater New Theatre Oxford next Friday and Saturday (September 8 and 9).

It will then transfer to London’s Playhouse Theatre for a month-long residency starting on Monday, September 11 and ending on Saturday, October 14.

Not bad going for something that was meant to be a side project.

“It was born from workshopping a ‘best of’ show to take abroad to people who don’t know me,” says Brown, who first appeared on our TV screens in December 2000 with his Channel 4 series Mind Control.

“But it gained its own identity and people seem to really enjoy it, even though they may have seen some or all of the previous shows from which the material is taken.

“Plus I guess there are enough surprises for it not to be too familiar. So I decided to tour it — albeit a smaller tour than I would if it were an entirely new show.”

Did the fact that Underground was designed to incorporate favourite routines from previous shows make it easier to put together?

“As the material was largely already in place, the challenge was to make sure it held together and amounted — as we always try to make the shows — to more than the sum of its parts.

“Strangely, being already familiar with the routines made finding the narrative more difficult than usual.

“But I also work and write with my creative partners, Andrew O’Connor and Andy Nyman, who together direct the show — and between us we seemed to find what we needed to.

“It’s a great three-way relationship and very rarely does that ever become overtly sexual,” he laughs.

Born in Croydon in 1971, Brown traces his interest in magic and psychological techniques to childhood.

But it was only later at Bristol University, where he studied law and German, that he started to take it seriously.

On graduating, he abandoned plans for career in law, deciding instead to concentrate on developing his skills in psychological magic.

He was able to pay the bills by combining performing in cafés and bars with a sideline in painting people’s portraits.

Did he ever imagine where it would all lead in his early days?

“Ha! No. The first show I performed was a dreadful, structureless, self-indulgent hypnosis show for my fellow students at Bristol.

“My mum came up on stage and played along because she felt a bit sorry for me. Luckily, I was so enamoured of myself that I couldn’t see how awful it all was. I hope I’ve gained some sort of sliver of perspective since.”

While still best known for his various TV shows, Brown is no slouch when it comes to live work. This is the 15th year he has toured and his stage shows have been seen by more than a million people to date.

“This was supposed to be a year off, tour-wise, but it hasn’t happened. I’ve been out doing a show in New York as well as Underground in London.

“It’s all been good fun. I enjoy it more each year. This show has been a lot of work to get it to where it is but I’m very happy with it and the responses have been great.”

While describing himself as “an entertainer first and foremost”, Brown has always been keen to diversify his offering.

The past year has seen him publish a book exploring the history and philosophy of happiness.

Happy: Why More or Less Everything is Absolutely Fine is a 448-page meditation on one of the most enduring topics in the history of human thought.

The book covers a lot of ground — taking in everything from the Stoic philosophers to the modern-day
self-help industry — but has been very well received by readers and critics alike. Has its success encouraged Brown to continue his work as an author?

“I loved writing it and very much miss it. I’m eager to write something else, but Happy took three years and I don’t want to rush it. But yes, very much so. I’m assembling my thoughts at the moment around a topic I find compelling and we’ll see how it goes.”

The magician is also the “author” of a new ghost train ride at Thorpe Park in Surrey. Set aboard an old train carriage in an abandoned warehouse, it has been proving a huge success since it opened last summer. But what scares Brown himself, if anything?

“Most of us live with one of two basic fears — that of abandonment or being overwhelmed. I’m very much in the latter camp. I like my space and quiet pursuits, and am unhappy when people make demands on me.

“It means I’m good at avoiding stress but sometimes so good that I don’t really embrace new challenges.

“By comparison, someone with a fear of abandonment will tend to move towards stress to try and fix it, and will be prone to anxiety and taking too much on.

“I’m the opposite of that, which is why the Stoics — which I write a lot about in Happy — resonated with me so well.”

For all his stage success, with his live shows having garnered two Olivier Awards, it’s safe to say Brown’s army of fans would be “happy” to see him back on their TV screens at some point.

“Yes, it’s about time. I’m starting to think about it, but nothing clear yet.”