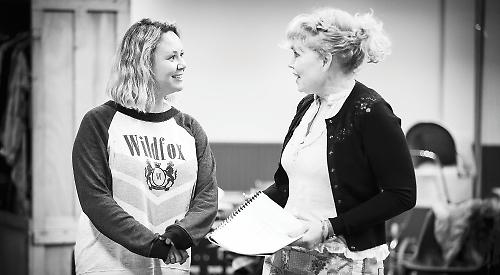 How the Other Half Loves | Theatre Royal, Windsor | Wednesday, August 30

PLAYING to a full house in a newly spruced up Theatre Royal, Windsor, this revival of an Alan Ayckbourn classic was full of merriment, misunderstandings and cleverly structured farce.

Three couples in the Sixties find their lives entwined to hilarious effect, amid themes still visible today such as class divides and patriarchal patronising.

Boss Frank Foster and his wife Fiona invite Mary and William Featherstone to supper and the following night Teresa and Bob Phillips also have the Featherstones for dinner.

Mary and William each find themselves being used as pawns in a game where Bob and Fiona are trying to disguise their affair.

All this is served up in a wonderful setting of a split-screen house, with the geometric Sixties decor of the Phillips household being literally spliced alongside the ornate furniture of the Fosters’ home.

So we as the audience have to acclimatise to a dual way of thinking, as characters move around on stage together but we realise they are in separate locations — or have telephone conversations next to each other.

This built up to an elaborate and raucous dinner-table scenario, with Frank Foster’s anecdote spiralling out of control in parallel with the Phillipses’ relationship imploding, all the while with Mary and William getting more and more twitchy.

As the uptight, tense and reserved Featherstones, Matthew Cottle and Sara Crowe made for an excellent pairing, with hand slaps, one puce-faced scene and a vacuum-cleaner hiding place proving particular highlights.

Robert Daws’s cuckolded Frank, who thought he’d got it all figured out, played well to Caroline Langrishe’s all-knowing Fiona, while Charlie Brooks and Leon Ockenden provided the pyrotechnics.

As various alibis backfired and truths were slowly unravelled, the amount of time it took for the penny to drop for Frank Foster truly was a joy to watch.

How the Other Half Loves is playing at the Theatre Royal, Windsor, until Saturday. The show tours to the Richmond Theatre from October 16 to 21.