Rendell's plot struggles to make the transition from page to stage 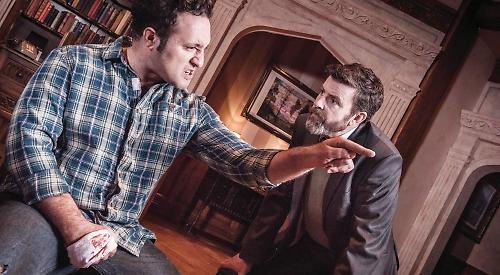 TWO positives to take from this adaptation of the Ruth Rendell mystery — the set is very good and the Playhouse seats are quite comfortable if you nod off.

I did so three times in the first act and once in the second. I learned later that I was not alone.

A Judgement in Stone has a stellar cast full of talent and a highly experienced director in Roy Marsden who knows this stuff inside out. So where did it go wrong?

The casting isn’t always convincing — Sophie Ward almost always plays upper middle class characters, not a down at heel Mrs Mop as she does here.

And Chris Ellison as the detective superintendent ought to be a shoo-in after all those years as DI Burnside in The Bill, but here he’s underpowered and lacks authority, mainly because of his lack of vocal projection.

The direction seems to veer from understated to hysterical without any reason other than to try to liven up the pace.

But the biggest problem lies with the adaptation — it’s hard to criticise two such accomplished playwrights as Simon Brett and Antony Lampard, and perhaps they didn’t have any choice.

The disappointing fact is that this play misses at nearly every turn.

The clue may lie in the programme notes, which make it clear that Rendell didn’t go much for complicated plots — she was interested in character and the psychology behind it.

Anyone fortunate enough to have read her work can confirm that.

She was a fine writer and the sudden alarming events which lead to multiple murder in A Judgement in Stone would have been no surprise at all in the book.

But here they seem to come from nowhere.

We’re given clues as to what lies behind the masks in these people, but there tends to be more caricaturisation than characterisation.

Robert Duncan’s head of the household is convincing — he rarely lets us down in any role — and Antony Costa’s rough trade and Pamela Dyer’s posh totty work convincingly within the play’s limitations.

But Deborah Grant’s hooker turned religious zealot is a mystery.

She comes out of nowhere, shouts, roars, sings incantations and causes mayhem for no explicable reason. Later we deduce that she is a messianic influence on the eventual murderer, but it’s over the top.

Again, in the book it would have made perfect sense.

But books allow time for characters and events to sustain, and this is where the play suffered.

Brett and Lampard have concentrated on plot, perhaps because they didn’t have any alternative.

The plot isn’t much because in Rendell’s writing it would have been less important, but there’s still a fair bit of it.

Perhaps the mistake was picking on this particular story.

It’s difficult having a go at actors, directors and writers. This reviewer has done all of those roles in lesser form and knows how tough each of them are.

But I’m afraid this gets a thumbs down.