'Lost in Austen' is a very nice place to be, says author 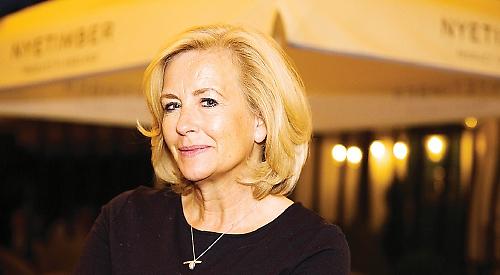 THE author behind the adaptation of Pride and Prejudice which opens the Kenton Theatre’s autumn season next weekend says she relished the process of “taking apart the novel” and seeing how Jane Austen had put it together.

As well as two novels for adults set in the present day, Gill Hornby is the author of a biography of Austen for younger readers called The Girl With The Golden Pen that has recently been reissued.

Without wanting to give too much away, she says she is currently working on a novel that is “sort of built around” the author’s life, adding: “I’m immersed in Jane Austen at the moment and it’s a very nice place to be!”

Prior to adapting Pride and Prejudice she had never written for the stage before.

“No, I’d never done anything like this — and I’d never collaborated, you know, because when you’re writing novels or journalism or anything you’re just sitting there on your own and wondering what the editor’s going to say. So this was completely different. And then it’s lovely seeing something that you’ve written performed.”

The production coming to the Kenton on Saturday, September 16, sees the veteran actress Hayley Mills reading an abridged version of the novel aloud to the audience.

Mills will be accompanied on stage by the pianist Ashley Wass and the violinist Matthew Trusler, who Hornby says had previously collaborated with Captain Corelli’s Mandolin author Louis de Bernières on a words-and-music production of Alice in Wonderland.

This time around, interleaving with Austen’s words, the musicians will be performing Carl Davis’s music from the 1995 BBC television adaptation of Pride and Prejudice. So how did this latest collaboration come about?

“I think it was all the violinist’s idea,” says Hornby. “Matthew with Carl, the composer. I think Carl wanted to find another life for the music.

“So they came to me and we had all sort of grandiose ideas about having two actors and three actors and things — and actually it was just left to me to design it and go through it.

“And so in the end I think what I decided was that the music was so great and the words were so great that together they could sort of stand alone.

“So I wrote the script with the idea of how the music would weave in and out of it. And then Carl and I got together and he adapted it — because of course his music was orchestral the first time.

“He adapted his music to just piano and violin. And he added a bit, because he can’t resist it — he’s like a firework going off in a million different directions.

If anything, the experience of going through Pride and Prejudice line by line has deepened Hornby’s appreciation of Austen’s achievement.

“It’s an incredibly robust novel. I mean, when you think of all the things that have been done to it and it’s perfect as a novel, perfect as a movie, perfect as a TV script — you know, you can do anything with it.

“I was going to do it with Lizzy and Mr Darcy, but actually I’ve done it with a narrative voice that’s sort of a bit Austen, a bit Mrs Bennet, a bit Lizzy, you know? It sort of fades in and out.”

For Hornby, the “reading aloud” aspect of the production points up one of the secrets of Austen’s success as an author.

“She would write during the afternoon — the Austens were a sort of big, busy, brilliant family, and they did reading aloud after supper. And she would read it aloud to her family. And that’s how she created.

“It was almost like, you know how they do screenings for Hollywood movies, but when they’re not quite finished, to see where people laugh and where people cry and if they’ve got that sort of rhythm right.

“I think that’s one of the reasons her novels are so perfect — there’s never a dull moment — because she would have felt her audience’s reaction — her family’s reaction — as she read aloud.

“It’s the most brilliant sort of product testing — just sitting there and feeling how people are reacting. So I think that’s why — I mean, not in any of her novels is there a kind of period of longeur where nothing much happens.

“I think she really got the beat of it — the ‘make you laugh, make you cry’ thing — going so cleverly like that. Just bloody brilliant.”