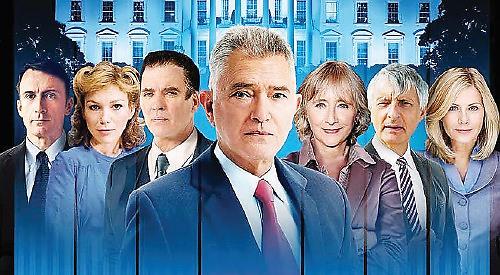 IT seems to be a truism of political life that as the stakes get higher, the knives get sharper.

In polymath Gore Vidal’s Sixties political drama, Secretary William Russell (Martin Shaw) and Senator Joe Cantwell (Jeff Fahey) are vying for the presidential nomination, both trying to shuffle to the top in this house of cards.

As each man goes on the defensive, their entourage has to manage this paparazzi-stalked hotel room existence while defending their reputations. Then comes the threat of dishing the dirt.

The action jumped back and forth between each camp in their hotel rooms and a slick use of passing campaign posters, camera flashes and reversible cushions enabled us to keep up with this.

The lofty ideals and Harvard intellectualism of William Russell was reflected in more sedate tones, while feisty self-proclaimed man of the people and populist Joe Cantwell occupied a space with more zingy colours.

The two couples played well off each other, the polished Russells versus the feisty Cantwells, with Gemma Jones as Mrs Gamadge providing the morality play element and setting the tone for the era.

Jack Shepherd held court and nearly stole the show in his wonderful depiction of a wise, experienced former president who lightheartedly skipped through the bathrooms and back corridors of the hotel to visit both sides.

Playing to a packed house, the piece built up from personal reflections and philosophising, via a treatise on the wisdom of treading carefully with revelations, to a clever denouement with some lovely little twists.