New dad will always be his daughter's 'old man' 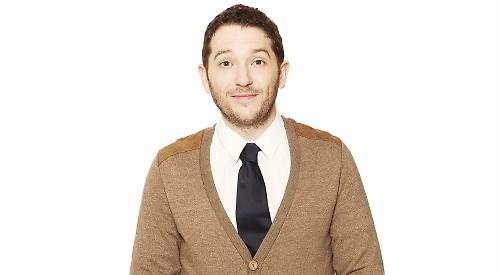 THE stand-up Jon Richardson is speaking from a rather unusual location. “I’m currently in the Aldi car park in Clevedon,” he reveals over the phone.

Who said the life of a comedian isn’t non-stop glamour?

Still, Jon admits that being on a nationwide tour with his brilliant new show, Old Man — which he is bringing to the New Theatre Oxford on Tuesday (September 26) and the Reading Hexagon on Tuesday, October 31 — is a blessed relief from his full-on domestic life.

The comic is a very proud new father — but things have been understandably frantic at home.

“Gigs have become very cathartic for me!” he laughs. “They’re now the equivalent of going to the pub or the cinema! Our baby is only two months old, so it’s obviously the perfect time for me to be leaving home for several weeks! It has to be said, I’m not terribly popular at home. But I’m assuming that by the time I get back home, my daughter will be toilet-trained, capable of dressing herself and able to drive!”

The new show is packed with such terrific reflections on the trials and tribulations of new fatherhood. Jon discloses some of the more bizarre incidents that have occurred since he has become a father.

In the show, Jon will also be explaining that the arrival of his baby daughter has affected him in many unexpected ways.

“Suddenly, global events take on more significance. When you’re single, you’re not beholden to anyone and you can shut down more easily. In the past, I had the idea that I’d live in a caravan with a dog near a pub with no responsibilities. But now when bad things happen in the world, I feel responsible for them because they’re going to impact on my daughter. The caravan, the dog and the pub have gone now!”

One of Jon’s main worries is that his daughter will grow up to resemble him. “What I’m dreading is raising her to be like me. If I hear her saying, ‘I can’t eat that chip because it’s touched those baked beans,’ I’ll know she got too much of me in her!”

Joking aside, Jon doesn’t want his observations about the impact his new baby daughter has had on his life to put people off having children. “I’m determined not to talk about my baby in a way that’s alienating. But it’s been such a big change in my life that I can’t not talk about it. It’s also nice to have something new to stress about. I can really get my teeth into this stress!” Despite appearing on TV shows like 8 Out of 10 Cats and being hailed by the Times as “one of our most individual and interesting stand-ups”, Jon remains appealingly humble about his work.

“I can’t believe I get to do this job!” he says. “As I get older, I’ve got more and more to talk about and I have more and more confidence.

“I love the privilege of looking back on my life every three years, turning it into a comedy show and sharing it with an audience. It’s incredibly cathartic. It’s a way of converting the difficult elements of life into comedy.

“None of us know what’s going on at the moment, so to be able to laugh at it in unity for two hours is absolutely great.”

Since last touring the country, Jon has looked on as the UK voted to leave the EU and witnessed the inexorable rise of Donald Trump to the US presidency. All of which prompts one key question: Why does it seem that no one else alive can correctly load a dishwasher?

As well as this pressing matter, Jon will be ranging over an array of other comic topics, including stress — a constant theme in his dazzling act.

“I got shingles on the day of the EU referendum. It’s good to see that my stress has got worse as I’ve got older and that now there is a physical element to it!”

Another amusing element of Old Man is that Jon regularly uses Twitter to interact with his audience.

“Recently, I talked to a man in the audience and he was shocked because I knew where he had been that morning, what football team he supported, and what his wife’s name was. It’s a good about-turn. That’s the joy of Twitter.”

He adds: “That man had messaged me earlier, but people don’t always realise that when you tweet, you’re building a public record of yourself. It’s nice to have all that free material. It means I can spend more time with my daughter and just take the mickey out of someone in the audience!”

Reflecting on how much he enjoys the experience of live comedy, he says: “It’s such a buzz. The instant reaction you get from the audience is such a privilege. Each show is a very honest portrayal of how I’m feeling that night. It can go off in any direction. The show is different every night and that makes it much more exciting. Every evening is unique.”

When the Old Man tour finally draws to a close, Jon reveals what he will do next. “I’ll be back at home, concentrating once again on being a dad and a pernickety husband!”

⚫ For more information on Jon Richardson’s Old Man tour, including a full list of dates and venues, visit www.jonrichardsoncomedy.com