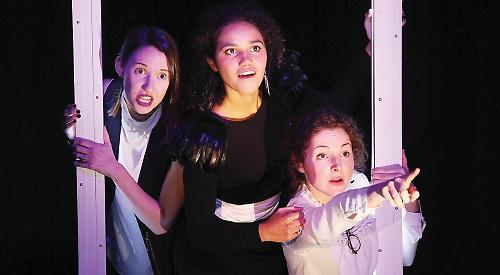 The Picture of Dorian Gray | The Watermill, Bagnor | Tuesday, September 19

OSCAR WILDE’S novel The Picture of Dorian Gray, which tells the story of a dazzlingly attractive young man who sells his soul in exchange for eternal youth and beauty, caused quite a stir when it was published in 1890.

Dealing as it does with philosophical and moral issues, Wilde’s story dramatised for the stage could be seen to be challenging and quite depressing as the plot charts the protagonist’s moral disintegration.

But not so in the very capable hands of Phoebe Eclair-Powell, who has adapted the story into a riveting and even humorous play now showing at the Watermill in Bagnor before embarking on a tour of schools and village halls.

Eclair-Powell has brought a whole new perspective into this production with a modern twist that turns even gender representation on its head. The extremely talented cast comprises three young women who act as narrators to the plot and take all the parts with impressive versatility, which enables the writer to introduce — dare I say it — different shades of Gray into the rather gruesome plot.

The flashes of leavening humour help produce an evening of very engaging entertainment that is sure to prove popular and accessible to audiences of all ages — surely an essential criterion when writing for a schools tour.

But in no way is this dumbing down Wilde’s original story. Director Owen Horsley hasn’t missed a trick in getting every aspect of Wilde’s genius over, and his simple but extremely effective staging using just a large picture frame as a vehicle for his actors works wonderfully well.

Emma McDonald in the title role and Eva Feiler and Emily Stott as everyone else give superb performances — and more than rise to the challenge of putting across Wilde’s remarkable story.

But the biggest bouquet of the night must surely go to the adapter, Phoebe Eclair-Powell, who has created a very clever play that deserves to be as enduring as Wilde’s original novel and is sure to be greatly enjoyed by the lucky schools it will visit.