Laughter in the face of fear is so moving 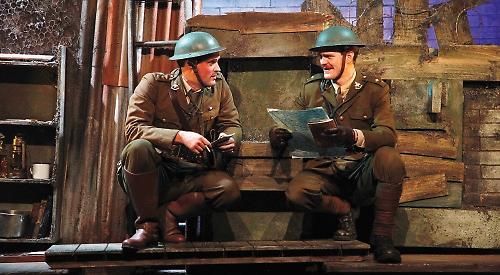 WITTY, funny, sad, engaging and a total triumph: The Wipers Times might be a minor classic and if you can get a ticket — which is doubtful — then grab it!

The title comes from the satirical paper which circulated in Belgium during the First World War and which was unearthed by the Private Eye editor Ian Hislop.

He and Nick Newman then wrote a stunning piece of theatre — part Oh, What a Lovely War!, part Journey’s End and 100 per cent affection for the brave, funny soldiers who produced The Wipers Times.

It was first a BBC TV film in 2013, then in September last year the theatrical version was produced at the Watermill in Bagnor, and is almost infinitely superior to Hislop and Newman’s last collaboration there, Amateurs.

At first glance this might just be an homage to the wit of these men trying to alleviate the conditions and threat of the worst war ever conducted.

But it’s the way is does it that marks it out as something more profound — this play is about resilience, courage, leadership and friendship.

We see the company of Sherwood Foresters go through Ypres, then the Somme then back to Ypres and Passchendaele, led by two officers who seek every opportunity to satirise what’s around them — their senior officers, the generals, the weapons, the enemy, nothing is spared the treatment.

Their bowels may be turning to water as they press yet another assault; the men are constantly under threat from gas, shells, bombs and snipers, and what sane person can survive that for any time at all?

But Captain Fred Roberts and his loyal Lieutenant Pearson always have a joke to hand for the men, and a tot of rum or whisky. The Wipers Times gives them a sane purpose amid the insanity of their lives.

It’s a tribute to the writing and the direction that this touring production has kept the West End cast. The quality shows throughout because the play demands a lot of the performers — they must swap roles, sing and do music hall turns which morph instantly into battlefield mud.

The set transforms through newspaper office, command HQ, No Man’s Land and trench in a seamless string of scenes.

The three central performances from James Dutton, George Kemp and Dan Mersh define the show and they never falter as the officers and senior NCO.

It’s funny where Oh, What a Lovely War! is not, for all its satire. It never tries to be ironic — although the characters do — because this is a warm piece showing us how humour may not dismiss the fear, but can possibly take the edge off the worst of it.

It’s men trying to regain a semblance of control over a small part of their lives.

Yes, we laughed, but we knew why we were laughing and it wasn’t to deny the fear and degradation — it was in recognition of it.