Uneasy 'What ifs?' make this dark thriller a gripping watch 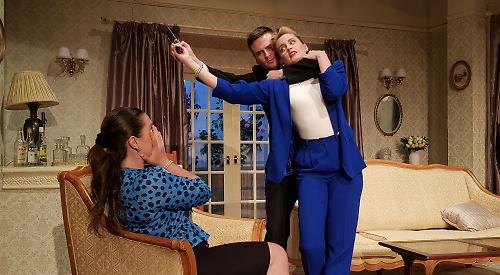 IT’S a horrible scenario. Someone has kidnapped your child and instead of a ransom they request to keep house with you for the weekend, with all sorts of threats should you tip off the police or any visitors.

Not really a situation conducive to much in the way of small talk.

In this dark thriller with light-hearted moments, Francis Durbridge’s script brings out uncomfortable hypotheticals, making the audience ponder — what would you do, follow the diktats and do as you are told, or try to forge an alternative route?

International star and film actor Robert Drury (the chameleon-like Alec Fellows-Bennett) and his wife Stella (Hannah Vesty) have been put in this position — their son Mike being snatched while Robert is in Rome.

He returns to the family homestead in England to inform his wife that they are now under the control of a puppetmaster with a mysterious motivation.

As the pair show the pain and discomfort they are in, various characters — including the enigmatic Inspector Burford (Paul Cleveland) bring with them changes of direction and we watch them try to figure out which way is up and out.

From the initial excruciating discovery to the dramatic ending, all the action takes place in the Drurys’ London home, but the cast used the themes of the play to create a dynamic and international feel, with various travels alluded to.

There were some excellent character studies, including a cockney-accented gentleman and a larger-than-life housekeeper from the couple’s Dorset cottage.

As the tension built and various weaknesses were exploited, there was a murder count of at least three figures — but to find out which three figures, you’ll have to see the show.