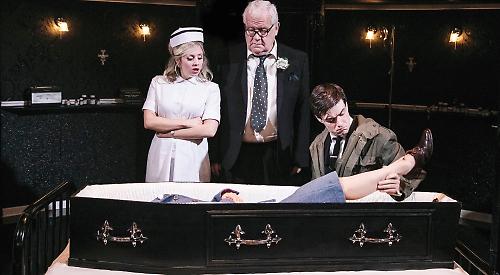 EXACTLY 50 years on from the tragic death of its author, Loot by Joe Orton is being revived in its original version and is now playing at the Watermill Theatre in Bagnor.

Director Michael Fentiman has risen expertly to the challenge presented by this complex and subversive play, which so shocked audiences when it was first staged in 1965.

The production well illustrates how social mores have changed since the days when audiences walked out in disgust during the first act.

Loot is unique in that it transcends all known genres, centring as it does on corruption and criminal behaviour with cynical attacks on the church and society’s institutions — all in the guise of something that resembles a rollicking farce.

Fentiman cleverly establishes the contrast between the attitudes of society 50 years ago with those of today by opening with the recorded voice of Mary Whitehouse protesting at the decline in moral standards. And after that it’s up to us, the audience, to draw our own conclusions.

Unsurprisingly, what was met with disgust 50 years ago is now met by knowing chuckles and downright gusts of laughter.

Hal (Sam Frenchum) and Dennis (Calvin Dembra) have robbed a bank and are engaged in trying to conceal the money.

Hal’s mother has just died, and they decide to hide the money in her coffin with the collusion of his mother’s Irish Catholic nurse, Fay, flawlessly played by Sinead Matthews.

Fay is a fortune hunter and has designs on inveigling the widower Mr McLeavy (Ian Redford) into marriage.

But then Inspector Truscott, thinly disguised as a water board official, bursts on to the scene and everyone’s plans are thrown into chaos.

Christopher Fulford’s performance as Truscott is masterly. With an awful gleam in his eye he is officious, bullying, calculating and flawed enough to be corruptible.

But unlike 50 years ago, lines about police corruption that back then were met with distaste are now received with laughter and applause.

Orton uses the relationship between Hal and Dennis as a vehicle for his views on society’s hypocrisy over homosexuality (the first steps towards decriminalisation took place a few days after his untimely death in 1967).

But so greatly have attitudes changed over the years that Fentiman only emphasises this with very light brush strokes.

But perhaps we haven’t come as far with our attitudes towards death. The corpse of Mrs McLeavy — a dummy in the original production — is here played superbly by Anah Ruddin.

The corpse is subjected to every indignity. She is stuffed into a cupboard on her head, stripped naked, and bundled about with a complete lack of respect.

When she is finally somersaulted back into her coffin the audience burst into spontaneous applause, which perhaps indicated the release of latent unease at her treatment as much as appreciation of the actor’s performance.

The play may be 50 years old, but it certainly has resonance and relevance today, and this superb cast perform it outstandingly well. Orton would undoubtedly be proud.