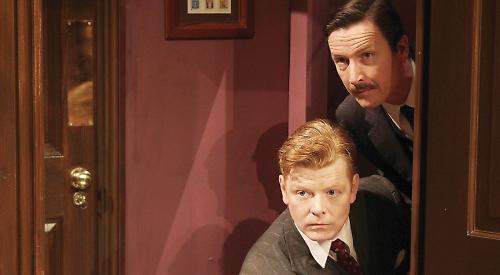 THE Middle Ground Theatre Company has taken this detective novel by prolific crime writer Agatha Christie and pumped it full of intrigue.

The stage is set, the persons present, and thanks to an announcement taken out in the local paper we even know where and when the murder is going to take place.

Chipping Cleghorn resident Letitia Blacklock has a penchant for taking a lot of people under her wing, and when she sees a notice in the paper informing residents that “A murder is announced” and it will take place at her house, on the coming Friday, at 6.30pm, she decides to have a little gathering.

With a curious coterie including an old school friend, some young cousins, a handful of eccentric locals and a hired cook from Mitteleuropa, not forgetting amateur sleuth and local legend Miss Marple, the hour is at hand...

The tensions build and the drama unravels amid a stately and sedate Fifties setting, with meticulous attention to detail as inevitably the props gave us little clues and hints were dropped here and there.

There was a real atmosphere and ambience of bygone days, harking back to an era where people answered the telephone in a greeting giving their locale and a couple of digits.

The timeless Miss Marple is here portrayed by a youthful Louise Jameson, who infuses her with a comic sense of cheeky curiosity and timing.

The tweed-clothed spinster, who is assumed to be a mere busybody but who turns out to have shrewd powers of observation, is a marvellous puzzle-solving device and support to Inspector Craddock (an excellent Tom Butcher), who has been sent to investigate.

Janet Dibley excels as the stoic central character Letitia Blacklock, as Inspector Craddock turns over every stone to find any motives for murder or hidden agendas.

This production manages to present a plotline in a state of flux, gradually revealing the truth in a timely manner and ensures it goes out with a bang, not a whimper.