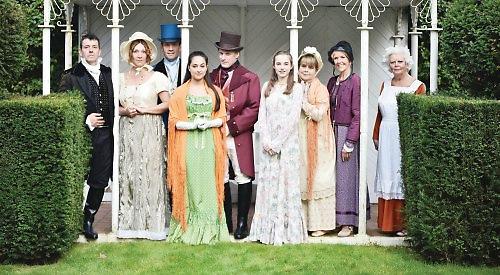 TWO hundred years on from Jane Austen’s death, Sense and Sensibility remains one of her most enduringly popular works.

Anyone who has a sister or a best friend can relate to the plot — and who can forget the instant infatuation of Kate Winslet’s Marianne during her romantic rescue by the dashing Willoughby in the hugely successful film version?

Olivier-award winning local author Jessica Swale proved the tale could also grace the stage by captivating audiences with her skilful rendering of the book for the Watermill Theatre at Bagnor.

Now the Henley Players are joining in 2017’s bicentenary celebrations of Jane Austen’s life and works with their production of Swale’s adaption.

Austen remains one of the most perennially popular and loved authors in the English language.

Her characters live on in our imaginations, her wit and wisdom are timeless giving her a fan base which extends across ages and countries.

Here in the UK, we associate her with Bath and Winchester, but there are more than 5,000 members of Jane Austen societies across North America and Canada.

Regency England is recreated every year in Canberra, whilst in Italy the Jane Austen Society is celebrating every novel in a grand tour of different Italian cities.

Even in Singapore, balls and costumed readings prosper.

Each to their own, as Austen intimated in Sense and Sensibility. At one point she has Elinor Dashwood say: “I wish, as well as everybody else, to be perfectly happy; but, like everybody else, it must be in my own way.”

Here in Henley, the Kenton Theatre is celebrating Austen’s life and works with three events this autumn — the first of which last month saw Oscar winner Hayley Mills read an abridged version of Pride and Prejudice set to music from the 1995 BBC television adaptation.

The evening of Wednesday, November 13, will see the historian and presenter Lucy Worsley give a talk based on her book Jane Austen at Home. This promises to explore the author’s life through the places and spaces that meant the most to her.

For now, though, it is the turn of the Henley Players, whose production of Sense and Sensibility runs from Wednesday (October 18) to Saturday, October 21. Evening performances are at 7.30pm, with a matinée at 2.30pm on the Saturday.

When her wealthy stepson, urged on by his money-grabbing wife, cheats them of their fortune, Mrs Henry Dashwood and her three daughters, Elinor, Marianne and Margaret, are left penniless.

They are forced to leave the comforts of Norland Park, their family home, and rely upon the charity of a distant relative, Sir John Middleton, and relocate to chilly Barton Cottage in Devonshire.

However, the arrival of a handsome stranger, John Willoughby, at the cottage with a rain-drenched Marianne in his arms, leads the sisters to believe that their fortunes are changed forever. But have they?

The play’s director Julie Huntington told the Henley Standard how delighted she was as an Austen fan to be bringing Sense and Sensibility to the Kenton. She said: “This is not only the 200th anniversary of Jane Austen’s death — she also now appears on our new tenners!

“I had fallen in love with Austen’s work at school and this adaptation by Jessica Swale has reignited my passion for her.

“It is dynamic, fast-moving and very funny, but also has great depth and does not miss the opportunity for social comment.

“The cast and I have had a ball during rehearsals and cannot wait to bring the piece to the Kenton stage.

“I hope it will help audiences fall in love with Jane’s work all over again, as did I.”