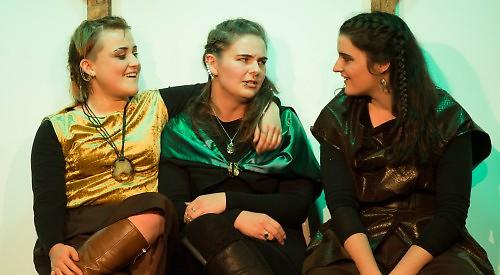 WHEN you book your tickets for Aidan Moran’s Hamlet at the Progress and realise that Hamlet is played by a woman, you might be expecting the unexpected.

Hamlet is undoubtedly part of the established cultural landscape; this fresh production encourages the audience to deepen their understanding of the drama by focusing on relationships between characters. This is a production of real substance — no gimmicks.

Hamlet is played by Megan Turnell as the daughter of the king and queen. However, there’s no laboured message here: the view of the director is why not cast a woman as Hamlet to allow strong emotions to be seen through a female perspective? Turnell offers a compelling and convincing representation of a character’s alienation and breakdown. I was gripped.

An accomplished supporting cast ushers the performance along with their sheer energy. Among Hamlet’s coterie, Rosencrantz and Guildenstern (Izzy Hayden and Chloe Stokes) offer an affable and cheeky complement to Kate Shaw’s dependable Horatio. Laertes (Alex Critchley) is a concerned brother to Ophelia (Tanvi Virmani), who will break your heart as she descends into despair and madness.

With its emphasis on states of mind and fluid gender roles, this production has a very contemporary relevance — it’s a play for today. Yet a sense of old Denmark is maintained by clever use of set design and costume.

Shakespeare’s incomparable language is well served by the thoughtful, well-pitched delivery of the dialogue. But there is also plenty of spectacle in this production: music, dance, song — and some impressive sword-fighting.

Progress is a small theatre with a large presence. In this intimate space, actors really engage with the audience. They speak to you directly of the play’s powerful emotions: loss, bewilderment, anxiety, grief. This is a memorable production by a talented cast and production team. See it if you can!