They adder cunning plan — and it's paid off handsomely 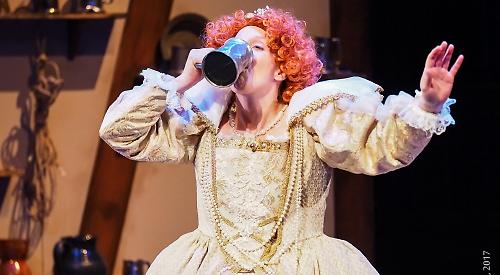 IT takes cast-iron confidence to step into the codpiece of characters as Edmund Blackadder et al — and the team at South Hill Park pulled it off.

The acerbic wit of Rowan Atkinson’s Blackadder and his dimwitted foil and skivvy, Tony Robinson’s Baldrick, were here conveyed wonderfully well by Adrian McDougall — whose sense of timing and hilarious
ad-libbing at the misbehaving props deserves a mention — and Ashleigh Wells.

They were supported by a highly bonkers and eccentric cast, from the dichotomous Whiteadders, ascetic Puritans with a penchant for ostentatious cross-bearing, to a screechy Queenie, a marvellous Melchett, a bouncy Lord Percy, a bumbling and inept Prince George, a barking Duke of Wellington with a huge schnoz, the virile Lord Flashheart (“Captain Slack Bladder!”), Captain Darling, and so many other beloved characters originally brought to us by Steven Fry, Hugh Laurie, Rik Mayall and co.

Taking on a well-loved BBC comedy series that covered four eras, starting off in the Middle Ages, with various historical stop-off points through to the First World War, for simplicity’s sake our host was Professor Christopher Starkers (Peter Andrews), Emeritus Professor of History and a jolly good Fellow of Bunkham College, Cambridge.

He set us off on our journey with his wrap-around guidance, delving into the treasure trove of gems, featuring some of Blackadder’s greatest hits and specifically dipping into the episodes The Queen of Spain’s Beard, Beer, Duel and Duality and Private Plane, replete with turnips, cannon fire, strategically placed cigarillo cases and lederhosen.

Not many evenings could legitimately start off in mediaeval times and end up in a German prisoner-of-war camp with one man and his sidekick trying to find the best way out of trouble or into a cushy gig.

With Blackadder master of the slow-burn and deadpan delivery, and Baldrick master of his own slow wit with his cunning plans, this was a welcome homage — with innuendo, fart gags, playground behaviour and toilet humour, alongside satirical digs at the powers-that-be throughout the ages.

It was great being reminded of such phrases as “Fortune vomits on my eiderdown” and a joy to see the sheer surreal absurdities of life as reflected in Richard Curtis, Rowan Atkinson and Ben Elton’s writing.

This show would be enjoyable if you weren’t familiar with the original series, and all the more so if you were. Here the cast took a winning formula from a successful show and made it their own. Now to dig out the boxset...