Coward shows there's many a slip between Sidcup and lip 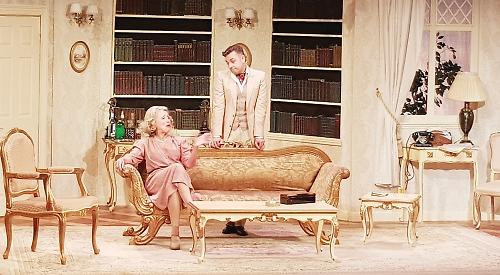 Held in place with the steadying hand of Hilary Harwood as Felicity, Countess of Marshwood, with her shrewd character judgements and moral backbone, the story linked Hollywood starlets with the English class system of the Fifties and an increasing awareness of the need for social equality.

The countess’s errant son, the fickle Nigel, is returning home with a new Marilyn Monroe-esque bride-to-be, Miranda, which horrifies her beloved personal maid, Moxie, as it transpires this is her long-lost sister — putting her in an inferior light.

So Felicity hatches a plan, along with Crestwell the butler and her nephew Peter, to elevate Moxie’s social status.

Cue much comedy and drama, which had us at turns squealing with delight and squirming with the awkwardness of it all.

Felicity had a way with words, including a French pronunciation of “courage”, while we delighted in Moxie’s reaction to her sibling’s description of her supposed slum childhood complete with Cockney drunken mother and Bow Bells, knowing all the while that the truth was located somewhere in Sidcup. Here Coward’s “gay insouciance” was provided by Crestwell and Peter, with a farcical turn upon the arrival of Hollywood A-lister Don Lucas, Miranda’s former beau.

As Felicity variously admonished, curtailed, dissuaded and sat back to watch it all unfold, it was clear who held the upper hand.