Eighties throwback to life on council estate is tough to take 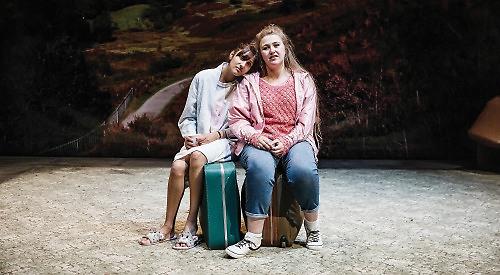 ABOUT seven minutes in we are treated to the bare buttocks of a 27-year-old man deflowering his two babysitters in his car. Rita, Sue and Bob Too is a comedy but certainly not of manners and forget romance, that’s for other people.

Indeed deflowering is not a term any of the characters in this gritty slice of Eighties realism would recognise, nor its gentle sentiment.

The play is a revival from the Royal Court performed by Out of Joynt and it races through at a surprising pace.

It was written by someone who knows, Andrea Dunbar, a woman from a Bradford council estate who, rather than agonise over the misery of decaying working class life, chose to record what they did.

All of this play happened to Dunbar in some form — underage pregnancy, married with three children by 20, trammelled into a dull job with all expectation crushed.

The message from Rita, Sue and Bob Too is the simple acceptance of this. Their world is what it is, ignorant in many cases, oblivious to morality and the law unless they get caught.

Sex is the best entertainment on offer to them — arguably it is anyway — so they get on with it and age differences count for nothing.

It’s hard to see this in a post Savile world, it is of its time but it still has much to say today about opportunity and fulfilment.

James Atherton, Taj Atwal and Gemma Dobson are utterly convincing as the central characters locked into a world with its own rules and hierarchy — not a system which Social Services would recognise, but one which everyone on the estate acknowledges.

The simulated sex scenes are comical with descriptions of the usage and application of a condom, the completely functional nature of the act — foreplay is another concept for others — chimes with the cool reality of this world. Everything is consensual and there is absolutely no brutality, but little affection either.

The set is a clever juxtaposition of a tenement block opening out on to the beautiful green Pennines, the only dressing is four chairs which convert from living room to car which all goes to speed up the action.

We live in a different time now and some of this play may seem difficult to take, but if we are to believe the reports, life on the modern social housing estate is no different — although a lot harsher.