Lives of supporting cast go under the spotlight 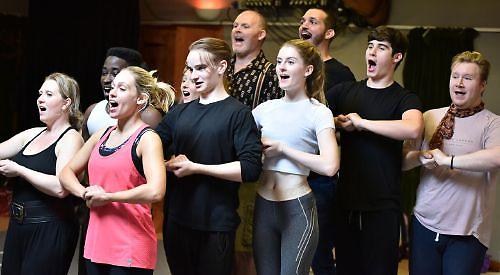 A DAY in the life of 17 dancers vying for a spot in a Broadway musical will be staged at the Kenton Theatre in Henley.

A Chorus Line provides a glimpse into the personalities of the performers as they describe the events that have shaped their lives and decisions to become dancers.

This is the latest production by the Henley Amateur Operatic and Dramatic Society and there will be five performances from November 8 to 11.

It is Broadway’s sixth longest running musical and is a funny, heartbreaking, and honest account from the point of view of supporting cast members rather than the usual stars of the show.

The play, which first opened in July 1975 and won the Pulitzer Prize for Drama a year later, also includes memorable songs such as What I did for Love, One, I Can Do That, Nothing, and Dance: Ten Looks; Three. Set on the bare stage of a Broadway theatre, the play begins after the first round of cuts, when the show’s director and choreographer ask each dancer to speak about themselves.

It is directed by Lloyd White, has been choreographed by Emma-Jane Taylor and will be the 10th show at the Kenton for musical director Amy Bingham.

Mrs Bingham said: “A Chorus Line is fabulous and a really important piece of musical theatre. It was groundbreaking in that it showed the people in the chorus rather than focusing on the stars.

“Although it is called A Chorus Line there is not very much chorus music. It is set in an audition and for each performer it is an audition for a show. Each performer is vital because each one tells their story.

“Because of that, the show is very difficult to put on. There is no scenery, no set changes, everybody is on stage all the time — it is a continuous piece of theatre, without an interval and all the performers need to stay in character all the time.”

She said the production is also complex as it needs to move seamlessly between songs as there is no chance to break for a new scene.

Mrs Bingham said: “All the performers have to know what they are doing because once the show starts you have to keep going until the end. There is also lots of different styles of music. There is a lot of jazz and funk as well as some pop while the dancing has everything from tap to modern.

“The music is fabulous, it is very expressive with lots of underscore and glamour. It is very varied so for that reason the performers need to be equally strong and versatile so it can be difficult to get the dancers and is another reason why this show is rarely performed.”

Mrs Bingham, who is a director of performing arts at a school, says the show still feels current 40 years on. “I am very excited by it,” she said. “I do a lot of this stuff and this is one that I am most excited about because the music is so good and because the show is so rarely seen.”

She added: “It is one of those shows that people who love shows love. Not everybody knows about it but anybody who knows music theatre will be really excited to see it.”

⚫ HAODS will also be holding a collection for the Help for Heroes and Royal British Legion charities during show week.