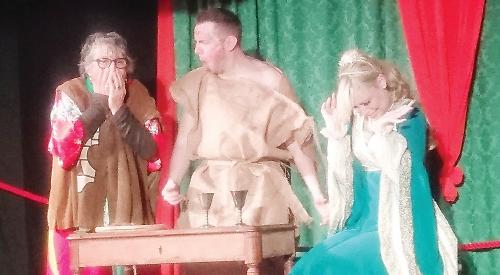 A MODERN adaptation of William Shakespeare’s Taming of the Shrew will have a two-night run at the Henley Amateur Operatic and Dramatic Society studio in Henley, writes Phil Simms.

Will You, Won’t You is presented by the Full Tilt theatre company and is a comedy around the idea of courtship told in a cabaret-style. It will be staged at the New Street venue tonight (Friday) and Saturday with doors opening at 7.30pm.

The play focuses on the courtship between Petruchio and Katherine, who is headstrong and stubborn and is initially unwilling to enter into a relationship. But that doesn’t stop Petruchio’s attempts to “tame” her and turn her into a compliant and obedient bride.

The cast of four comprises Heather Johansen, who is narrator Agatha Sly, Craig Martin as Petruchio, Samantha Fields as Katherine and Lukas McCabe as musical director and they will appear in Elizabethan-style dress.

Ms Fields, who lives in Woodley, said: “This play is very difficult to do a modern adaptation as the basis is the woman being tamed to a man’s idea of what a woman should be. Agatha realises Katherine’s qualities of being stubborn and not to be beaten down so the play is also about showing different kinds of passions and seeing how people may feel different to what appears on the surface.

“What we are trying to show is that you can’t just take what you see on face value as Katherine may not be the only one being tamed. That’s why we have set it in a boxing ring, to show that it’s not to be taken seriously — the way we describe it is a fast-paced and high-energy comedy.”

When audience members arrive at they will be greeted by the characters who will build up the type of atmosphere you would find at a pre-heavyweight title fight.

A supper of lasagne and vegetarian options will be served with the performance starting at 8pm. The show lasts about an hour and a half.

Tickets are £15 each, which includes supper. Drinks will also be available to buy. There is a ticket offer of buy four and get an extra one free. Tickets can be bought from 07926 784991 or from www.ticketsource.co.uk/
henleyoperatic