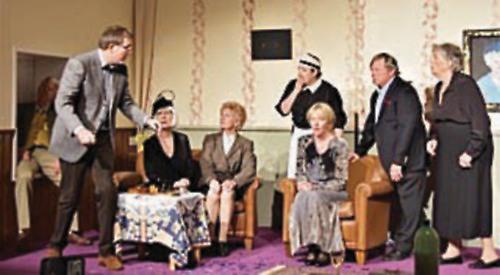 TWENTY-FIVE years since the late Peter Sly whipped up enthusiasm for a local amateur dramatic group in the parish of Remenham, Murder Afoot is their 19th production.

It is a tribute to the community spirit of this small parish that it manages to put on productions of such fun and calibre year on year — with a loyal audience in support each time.

Murder Afoot with its twists and turns of plot with the finger of guilt swivelling as fast as a weathercock in a high wind, is not the easiest of scripts.

All credit then to director Felicity Rutland whose experience, good humour and attention to detail helped the large cast to put on such a good production.

It is never possible to mention each actor by name. One hopes that being part of all the fun of this production of Murder Afoot is reward enough.

That said, Barry Rosier (Malcolm Platt — the wayward son) must be mentioned for his body language and facial twitches alone.

The energy of Darrel Poulos (Thomas Tottering, future son-in-law) is enough to make an audience laugh as soon as he appears on stage.

As Murder Afoot is set in the Thirties there was plenty of opportunity for Angie Emerson (Penny Platt) and Louise Binney (Collete LaMarre, French songstress of dubious moral values) to dress up to the glamour of the age — an opportunity they both relished, as did the audience. Not an inch of glamour and glitz did they spare — glorious to see.

Happily, the writer of Murder Afoot was wise enough to include the role of narrator, ably performed by Ian Fraser, who did his best to keep the audience informed as the murders and confusions stockpiled around the Manor.

Eileen Collins was a white and spooky ghost who rose up from the stage from time to time to forewarn the audience of dramatic events to come (what more!).

She is to be congratulated on crossing the river every night (albeit by car) in her nightdress and for her loyalty of some decades to Remenham Thespians. One never mentions a lady’s age of course, but...

Bill Ronald as Inspector Bullock 2 had the tricky task of delivering lengthy, wordy speeches but he did it and held the audience’s ear meanwhile. No easy task. Whether the audience was any the wiser at the end of his speech, who can say?

And whose inspiration was it for Nigel Gray to play Inspector Bullock 1 as a primping, prancing, very camp policeman? Brilliant and, in these politically over-correct times, it made for a very funny interpretation of his role with plenty of chances for him to play up to it — which he did.

Then there’s the rector, Father Martyn Griffiths. He may be retiring from church duties but, after his performance as Dick Drake, the chauffeur, he need have no fear of where to next.

Without doubt, a career as a chauffeur beckons. And no one pulls a banana out of a napkin with more aplomb than the rector.

Speaking of aplomb, how did Liz Cope keep her cool as prompt when actors threw in their own witticisms while others whispered “Where are we? Which line is that?”

We all know that it takes a team to put on any production — on stage, back stage, front of house. Everyone counts but it also takes an inspired seat in the director’s chair to make any production work.

Director, Felicity Rutland, is to be congratulated for the success of this production. To gather together a raggle taggle of parishioners and guide them through the intricacies of a script such as Murder Afoot towards such a fun-filled performance and to sell-out houses every night of their three-night run — that was no small feat.

“More! More!” the audience cries. And for next year’s production...