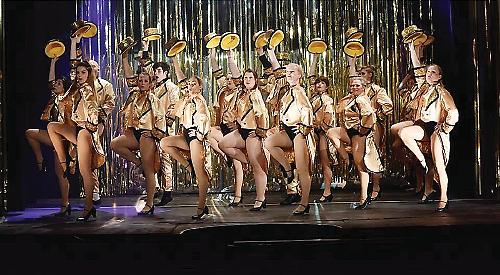 A CHORUS LINE was once the longest-running musical on Broadway, playing more than 6,000 performances and bagging a plethora of awards.

With this in mind, and with the premise of the piece being that every cast member is good enough to be auditioning for a Broadway show, it is always quite brave for an amateur company to take on. HAODS, however, have had a decent stab at it.

The concept is simple and neat: we are watching an audition for an upcoming show, but unusually the dancers are required to delve in to and reveal their backstories. Thus we are granted a peek behind the glamour, sparkle and fakery of theatre, into the reality of what motivated the performers to this point in their career. Their stories are not generally happy ones.

The show is very much an ensemble piece, but tonight it was more about individual performances.

Tom Chapple delivered a brilliantly honest and powerful monologue as the angst-ridden Paul, but the poignancy of his potentially career-ending injury at the last stage of the audition was somewhat lost to both me and seemingly the other cast members.

Liz Balmford, Richard Bott and Pete Bridekirk had lesser roles but played them to perfection, maintaining flawless characters throughout, while Vanessa Clayton as Diana was very impressive. Other characters were presented well but accents were inconsistent and many nuances of the piece were missed or avoided.

Elements of the show were excellent, but we never saw the “precision dancing” that Zach (Tim Harling) required, even in the final number where the individuality of the disparate cast members should have been removed.

Despite some strong ensemble vocals, the cast were a little let down by a temperamental and aggressive sound design and some weakness in the pit. I did however very much enjoy the staging surrounding the powerful and moving ballad What I Did for Love.

In general, the show was well received, but the sizzle and artistry of this classic piece were, for me, lost.