This empress has clothes aplenty — but how much of a choice? 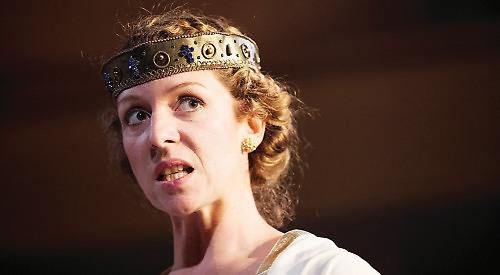 TAKE the real life story of a determined would-be queen. Act out that narrative in an atmospheric venue close to where these historic events unfolded.

This sounds like a recipe for a great piece of theatre — which is what you get if you go to see Hal Chambers’s Matilda the Empress.

Matilda’s tale is one of battle, betrayal, dramatic turns of fortune and fierce family loyalties.

As a woman in a political arena, she is denied the birthright granted by her father Henry I: succession to the English throne.

The assumption is that a woman cannot rule. Matilda is not one to take things meekly — she fights for her rights. But in the process she learns some harsh life lessons about how actions have consequences.

The sacred space of St James’s Church has been turned into an intimate theatre space, placing the audience at the heart of the action — and there is plenty of action in a play so focused on civil war.

Design, music, sound effects and lighting deserve special recognition, as does the carefully choreographed movement, which brings the battlefield to life in a confined space.

The audience is up close and personal with the cast, which is especially thrilling when the cast is going at it with swords, maces and hand to hand combat. There’s some impressive stage fighting in this production.

Matilda the Empress is a play for Reading and its history, centring on the impact of Reading Abbey on the economic prosperity of the town. But events are presented against the wider backdrop of the kingdom and the continent.

Portraying an empress requires a strong lead and Dani McCallum steps up to the plate. With her powerful stage presence, she is mesmerising as Matilda.

The empress is witty, mischievous and high-handed. She’s not an especially likeable character, but Dani McCallum convincingly gives us an imposing, magnetic personality.

From the first, she sashays around the aisles, dominating her household and captivating the audience.

McCallum ably evokes changes of mood and circumstance as Matilda’s fortunes decline. The audience is right behind her as she faces out her insufferable, bullying young husband, Geoffrey of Anjou (Jak Ford-Lane).

It’s tempting to paint King Stephen as the enemy, the usurper. But as a character he is more affable than the abrasive Matilda.

He lacks ambition, enjoying family life with his queen Tilty (Georgina Strawson) and his children. Oliver Gomm plays Stephen with a combination of passion and diffident good humour.

Michael Fenner’s Henry I dispenses advice to Matilda and her cousin Stephen about what it means to be a sovereign, recommending an assertive seizing of power — both Stephen and Matilda pay attention.

An implicit theme in the play is what makes a good leader. Is it better to rule through fear or make people love you? Matilda and Stephen are in opposite camps over this key issue. Admirable human qualities go under in the fight for power. We also see how power can be wielded by sheer thuggery.

This is a play of many moods. We see happiness as well as unhappiness, compassion as well as brutality. Moments of conflict and high tension are punctuated by scenes of tenderness and genuine emotion between couples, parents and children, friends.

In some respects, this is a comedy of manners — as long as we understand that etiquette and game-playing take on highly charged significance in a royal court.

The dark message of the play is that strife and political conflict can have a catastrophic effect on the lives of ordinary people.

We watch two people of Reading, Alfric (Edward M Corrie), a master builder of Reading Abbey, and his wife Emma (Elizabeth Crarer), a laundress, begin as an optimistic young couple who then, because of political events that occur, suffer hunger, destitution and personal tragedy.

The subtext is that political struggle can be the futile consequence of overinflated egos. The final showdown between Matilda and her admirer, Brian of Wallingford (Paul Brendan), makes this sad fact abundantly clear.

A committed and versatile supporting cast perform their roles with gusto. Dynasties and regal succession of course rely on children — and there were some spirited performances from young actors from Crosfields School and Berkshire Theatre School.

This a thought-provoking production, suggesting that in life neither rich nor poor have a genuine choice.

For example, marriages are arranged to protect political interests and secure lineage. Duty always comes before feelings. Yet the personal collides with the political and there can be real human damage.

The writing of Matilda the Empress is lively and elegant; accomplished dramatist Beth Flintoff is one to watch.

It’s also very evident that we will continue to see interesting productions from the Reading Between the Lines Theatre Company.

I had the privilege of travelling back in time last night. You can too. Matilda the Empress runs until Satuday, November 18.

For tickets and times, visit www.readingbetweenthelines.co.uk