This police drama is much cop 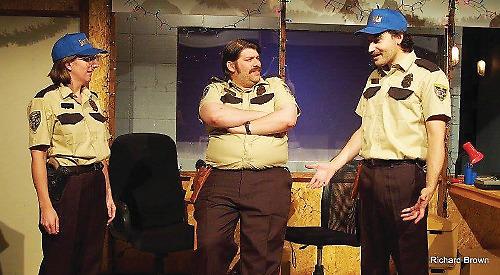 IT’S unusual to use the words “police” and “Christmas” in the same breath, but the latest offering from Progress Theatre, Daniel Clarke’s Buddy Cop 2, is a festive cop drama.

At its core, this is a cautionary tale about a small community wanting to rally around the poorly teenager Skylar (Isabel Mayes) in order to give her a final Christmas — even though it’s August. But all is not as it seems and things eventually fall apart.

As usual at Progress, there’s a clever set design from an imaginative production team.

The police office has been set up in a community centre following floods. An Eighties small town atmosphere is effectively evoked.

The office is functional, a little shabby, decked out with tinsel and fairy lights and with a portrait of Ronald Reagan on the wall. Buddy Cop 2 demands a lot from the four cast members representing the Shandon police team and they rise valiantly to the challenge.

Everyone will recognise the awkwardness and interdependency of relationships in the workplace: the officers have to support one another, allegiances develop, but still rank matters.

Officer Novak (Elise Power) has recently joined the team as the only woman. She good-humouredly battles her way through casual sexism to win the trust of her colleagues.

It’s perhaps no surprise that the rookie cop is exploited: she does all the work whilst her male colleagues (Charlie West and Alex McKibben) fill time and eat snacks.

The dialogue is understated and spare, making frequent use of phone calls, often to comic effect. The audience only hears one side of the conversation, so has to rely on their inferences to piece together the plot.

The ending of the play is bittersweet, with gains for some and losses for others.

In fact, the tone of the whole drama is bittersweet, with the comedy counterbalanced by a recognition of human sadness in the form of suffering, failure, disappointment and frustration.

This is a quirky piece of theatre; amusing at times, thought-provoking at others.