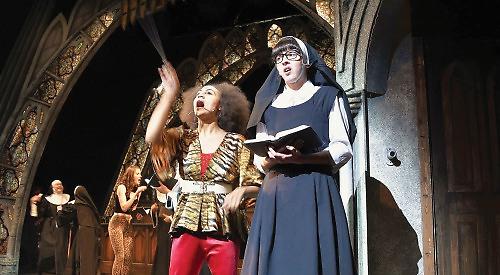 STEPPING into the role of Deloris Van Cartier, played so exuberantly and comically by the sublime Whoopi Goldberg in the Nineties film version, you might say that Sian Gentle-Green had some big shoes to fill.

And fill them — both high diva heels and austere pumps — she did, which soon became a habit...

As this amateur production of Sister Act warmed up and got into its stride, not withstanding a few slow moments and some mic crackle, it was highly entertaining and oddly endearing to see Deloris damp down her style and go “incognegro” in a convent, after she witnesses her boyfriend carrying out a murder.

As she struggles to cast off the outside world, she realises that the people cloistered away are little gems. While she gets the Mother Superior’s back up, for all the obvious reasons, it soon transpires that Deloris can provide an invaluable helping hand in tuning up the choir and smoothing out the nuns’ harmonies.

They in turn help shine a light on her own problems, and with some moving scenes, life lessons about different perspectives, and determination to do right by each other, lots of friendships are formed.

The upbeat gospel music and cheery dancing was genuinely powerful and uplifting, with bits of sparky comedy, and had us all merrily toe-tapping and hand-clapping away.