Musical is all about the music 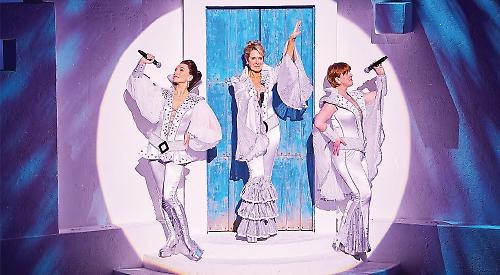 SLICK as olive oil, cool as ice, musically accomplished as only great professionals can be — Mamma Mia! touches all the right buttons for a great night out and the New Theatre audience were in no doubt where they stood — literally at the end, almost to a man... well, woman more like, them being the vast majority of the gathering.

Music close to brilliant then! But what about the story? Frankly it has as much dramatic spark as a box of spent matches, but equally frankly no one seemed to give a toss about that, so I suppose I shouldn’t either.

Except that it niggles that the songs were shoehorned into a narrative which didn’t really fit them. Often the storyline is bent and twisted around to accommodate some of the finest pop tunes created in the last century.

And they are terrific pop tunes, as only now this old blues rocker comes to understand. Nearly every one is a pocket masterpiece: some, like Dancing Queen and The Winner Takes It All, verge on immortality.

So they had to be included if this piece is to be a lasting monument to Abba. That meant the writer, Catherine Johnson, had to contrive ways of stretching the plot around 22 tunes, each one with a separate identity and hardly any of them serving the story. She deserves some kind of medal for that and indeed New York gave her a Tony for it, so that’s all right.

Anyway, that’s my week taken care of — I have 22 earworms eating their way into my consciousness where they never were before.

The plot... why am I bothering? You’ve seen the film. Anyway, 20-year-old girl brought up on a Greek island by her single mother is about to get married and wants to know which of three men is her dad. So she invites all three to the wedding. Er, that’s it. Cue the music.

And thank you for the music. It’s terrific — led this night by Kay Milbourne playing Donna Sheridan in an assured vocal display which never once betrayed the originals. The voices and the band were as good as you could want and a song was never far away under the expert guidance of musical director Richard Weeden.

The movement is also just right for the piece with the whole of this vast New Theatre stage used well. One song had four young actors doing impossible acrobatics while others used the entire company.

Yes, it was received well. So well that very few were left sitting at the end of the 15-minute curtain call. This reviewer was one, but that’s because he’s a miserable old curmudgeon, not because he didn’t think it was a good show.