'Drag Race' winner's aim is to be 'Absolutely Fabulous' 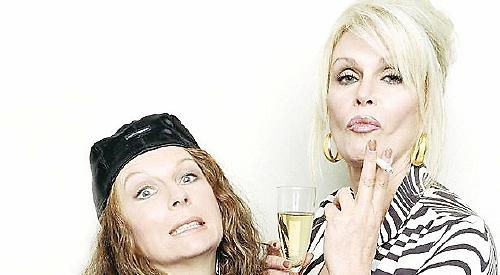 JINKX MONSOON is a unique performer who won season five of the hugely popular TV show RuPaul’s Drag Race and can be summed up by all those adjectives beginning with C — charismatic, compelling, charming, comic, clever, cynical, crude, catty and, above all, captivating.

A drag performer, a comedian, a singer and an actor, the multitalented 30-year-old from Portland, Oregon — real name Jerick Hoffer — has been enthralling audiences on both sides of the Atlantic for several years now.

No performer is quicker on the draw than Jinkx. She is an artist who combines a sassy stage presence with a superb ability to improvise, while also having a wonderful way of taking a song and making it entirely her own.

Having performed all over the world, she is playing Norden Farm Centre for the Arts in Altwood Road, Maidenhead, next Thursday (November 23).

Jinkx will be joined by musician and performer Richard Andriessen, aka Major Scales, for The Vaudevillians — a bawdy, rowdy musical comedy.

The two-hander sees Twenties husband and wife performers Kitty Witless and Dr Dan Von Dandy, aka The Vaudevillians, resurrected in the present day — only to discover that a host of modern pop artists have stolen their music and passed it off as their own... Now they are taking to the stage to reclaim their songs.

Billed as vintage cabaret with a twist of drag, the show is recommended for ages 16 and up.

Despite its outlandish premise, Jinkx shares with her Vaudevillians character a love of live performance — the stage being the place they both feel most alive.

“What I enjoy most is the sound of laughter,” she says. “I’ve done dramatic plays and less comical things, and I enjoy those, but I’ve always loved laughter above all else. When a joke lands well, and the audience laughs, that’s the most rewarding thing you can experience on stage.”

Jinkx’s other major attribute on stage is an uncanny capacity for reading an audience. “When you’ve been in cabaret and an MC for as long as I have, you learn how to read an audience very quickly. You find out very early on what part of the show they’re enjoying most and you steer it in that direction.

“So if they like the crudest humour, you give them what they want. And if they’re clever and getting the more obscure references, then you go in that direction. Once I understand an audience, I’m able to fine-tune my material very quickly.”

In recent years, Jinkx has developed a particular rapport with British audiences. She jokes that she has a special affinity with us because “I’m very pale and I don’t tan well!”

“I really enjoy the culture in the UK,” she says. “There are a lot of similarities between American and British culture but I really enjoy the fact that in the UK the level of tolerance and diversity and open-mindedness is a little bit higher.”

Another reason why Jinkx connects so well with audiences in this country is because she is a huge fan of British comedy.

“I watched an awful lot of British comedy as a child. When I was a kid, my mum often travelled to London, so I’ve always loved British comedy. I particularly love Absolutely Fabulous, which is where I got the name Monsoon. That’s my homage to Jennifer Saunders.

“What I love about that show is that it strikes a great balance between dry humour and slapstick. It goes from very conversation-heavy to slapstick in an instant. How many times has Edina fallen downstairs or out of a taxi? It’s such a well-rounded show, and the writing is so clever.” Jinkx adds that she has learned a lot of lessons from the classic British sitcom.

“Absolutely Fabulous has had a huge influence on my drag persona and my brand of humour. My comedy can be crude and crass, but I also try to be intelligent. And mostly my material is self-deprecating. There are very few jokes taking the mickey out of anyone but myself.”

Jinkx, who counts Noel Fielding and Jonathan Ross among her fans, will come to Norden Farm fresh from a five-night run at London’s Leicester Square Theatre performing her solo show Jinkx Sings Everything.

“It’s a completely by request show,” she explains. “There is no set list and no plan. I just go on stage with my accompanist, Joshua Stephen Kartas, and sing whatever song the audience suggest to me.

“I try to steer the ship in the right direction, which is towards musicals. I know every song from Chicago, Cabaret and Gypsy. But part of the fun is that there is no way for me to sing every song perfectly. The fun is watching us figure it out in stages. I’m good at ad-libbing and overcoming obstacles, so some of the best moments come out of confusion and surreal incidents.

“Sometimes I forget the words and start making them up. I’ll remember the intention of the song, but come up with something more foulmouthed than the original. My background is in improv, so that makes it much more fun for me.”

She adds: “What I want is for people to see a drag queen performing and realise that there is so much more to it than a costume and someone bending rules of gender. It’s also a political statement. Hopefully we can surprise people and help change their minds. I hope people will go away realising gender is fluid. It doesn’t matter what genitalia you’re born with — the only person who can decide what gender you are is you. You should walk away feeling you’re in control of your own destiny and of your own gender. I do that.”

At the same time, she admits that the persona of Jinkx has been a tremendous outlet for her.

“In life, I try to be positive, so that’s why I created Jinkx to be so foulmouthed and sassy. Even though I’m a positive person and always try to be nice, that doesn’t mean that things don’t frustrate me or that rage about the state of the world doesn’t build up within me.

Currently midway through a 20-date UK tour of The Vaudevillians that runs until December 9, Jinkx has no shortage of stage time ahead.

“Major and I play Dr Dan Von Dandy and Ms Kitty Witless, a married vaudeville duo who performed in the Twenties. Due to a freak avalanche, they were frozen alive. But thanks to climate change, they have thawed out and are now back to play their original music.

“The twist is that their music has been ripped off by modern artists — Britney Spears, Madonna and Cyndi Lauper have been playing their music and taking credit for it.”

Understandably enough, the pair are determined to set the record straight.

“Dan and Kitty perform the songs in a Twenties style. So Girls Just Want to Have Fun is an ode to the suffragette movement and Toxic is the song they wrote for their dear friend Marie Curie when she passed away.”

• The Vaudevillians starring Jinkx Monsoon and Major Scales is playing in the Courtyard Theatre at Norden Farm at 8pm on Thursday (November 23). Tickets are £16.50 and can be booked by calling 01628 788997 or visiting www.nordenfarm.org