Pupils lend their voices to 'magic of light and sound' 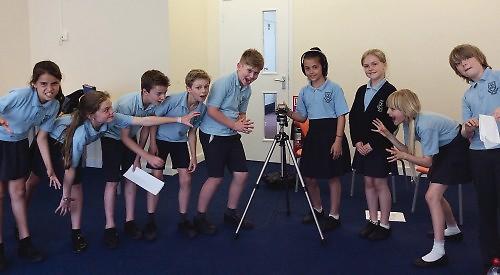 A HENLEY-based production company focusing on “the magic of light and sound” is back with another enlightening event.

This time last year Jeux D’Esprit teamed up with local author and cartoonist Steve Allender to present a free show based around two cautionary tales at the King’s Arms Barn in King’s Road.

Mr Allender is again involved in this year’s production — titled Something Wicked — but this time around the group’s collaborators are pupils from Trinity Primary School in Vicarage Road.

A Jeux D’Esprit spokesman said: “This year we have four traditional narrative poems for your delight — Christina Rossetti’s Goblin Market, Thomas Ingoldsby’s The Jackdaw of Rheims, William Cowper’s The Diverting History of John Gilpin and that old favourite Albert and the Lion by Marriot Edgar, which is narrated here by Frank Augur, who sadly died earlier this year and to whom the whole show is dedicated.

As was the case last year, the aim of the free event is to raise funds for the Chiltern Centre for disabled children. A total of £660 was raised in 2016, but this year the group’s target is £1,000. Chiltern Centre chairman Paul Barrett said: “Jeux d’Esprit is a magical entertainment form and we are delighted that they are again fund-raising for us. If you have not experienced their magic before you are in for a treat.”

Admission is free but booking is essential. To reserve seats, call Jill Richardson on (01491) 413384 or email jillr@thamesinternet.com

The production is not suitable for children under eight years of age.

Something Wicked is sponsored by Henley Town Council.