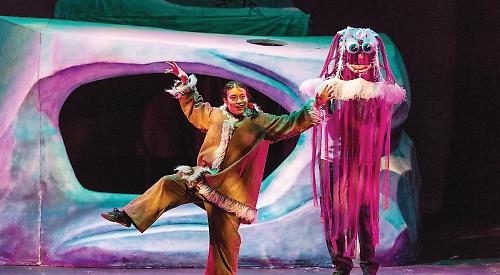 ALTHOUGH this ethereal piece was for kids, there was something very soothing and therapeutic about watching it as an adult.

In a moonlit Arctic setting, little girl Miki and her friends Penguin and Polar Bear are shooting the breeze — or, in this case, snowy stillness.

But Miki is shortly to disappear, falling while fishing into an amazing adventure in a strange underwater world.

Accompanied by a very apt haunting and melodic Sigur Rós-esque soundtrack, which felt like the musical equivalent of the Aurora Borealis, and with a playful juxtaposition of scale and different perspectives, we travelled with Miki as she disappeared underwater and — spoiler alert! — eventually resurfaced.

My kids found it enchanting as well as hilarious, as Penguin huffed and puffed to pedal a light-up mechanised bicycle to power a wind turbine, and his efforts proved fruitless next to Polar Bear’s attempts.

Intermingling perfectly-executed puppetry with play-acting, this was crisp, succinct and sweet theatre.

The audience included some very little children and all were good as gold — hushed and awed by the sights and sounds and the effects of bioluminescence on stage. My children declared it “amazing” and I was inclined to agree.

Miki is playing until Saturday, December 30. To book, visit www.norden.farm