Musical about how folk speak has something profound to say 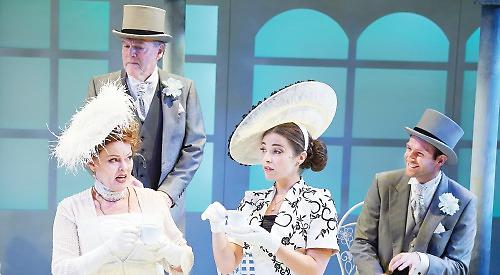 My Fair Lady | The Mill at Sonning | Friday, November 24

THAT Professor Higgins, eh? What a bast...ion of moral rectitude, what a champion snob, what an arrogant prig!

My Fair Lady is something to savour on lots of levels — terrific singing, acting and movement and a musical which, despite its lighthearted coat, has something profound to say about the haves and the have-nots.

Eliza Doolittle is a have-not and no mistake. She flogs flowers outside Covent Garden market in the hope of getting enough to pay her lodgings for the night. Then Higgins — boo! — hears her speak and makes a bet to convert her from a semi-literate street girl to near royalty in six months.

Bethan Nash as Eliza manages the gradual change from poorly educated guttersnipe to sophisticated lady in carefully nuanced stages, so that by the end we are quite prepared to believe she could be a duchess. Hers is a triumph of vocal performance and dramatic range.

Her theme tune — not her only one by a long way, but one which comes early and defines her story throughout — is Wouldn’t It Be Loverly.

All she wants is a room somewhere, far away from the cold night air with one enormous chair ... oh wouldn’t it be loverly! And right there is the key to why she accepts the coldness, humiliation, bullying and contempt given to her by Higgins.

There’s loads to say about the social comment in the original play from which Lerner and Loewe took this idea — Pygmalion by George Bernard Shaw — but perhaps that’s best left to the Economist or Prospect magazine.

Here we shall concern ourselves with a pretty plot — unlikely but not impossible — which stirs the imagination and makes us yearn to see it all work out. Whether it does, you will have to judge for yourselves.

It’s a captivating journey and the first act seemed only half the nearly 90 minutes it took. That’s because these performances are so committed — stand up also Phil Snowden as Alfred Doolittle, Eric Carte as Colonel Pickering and Felicity Duncan as Mrs Pearce with an honourable mention for Susan Kyd as the professor’s mother.

The songs are exceptional, the choreography perfectly tailored to the Mill’s small stage — even with a 12-strong cast — and Eliza’s acting and singing melt the heart.

This is a full-blown musical and would normally need a stage four times the size of the Mill’s. But the dancing and acrobatics are so skilful and contained, while appearing to be wild abandon, that the size doesn’t matter.

It was pleasing as well to see the band, led by MD Joe Bunker, on stage at the end for a bow.

The Mill has a high bar to reach after last year’s Christmas musical, High Society. Does it exceed that marvellous show? No, but it matches it, and that is a major accomplishment.

Congratulations to Joseph Pitcher, who directed both.

In short, this is a Christmas treat.