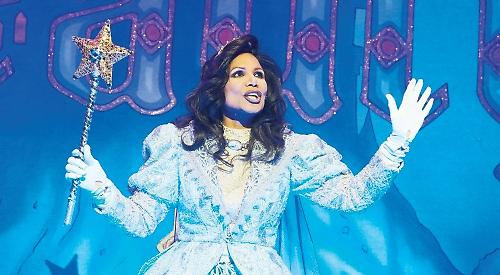 AND so to Windsoria and Etonia, where writer Nurse Paloma Pinchme, sorry, Steven Blakeley, and trusty accomplice Kevin Cruise, turned up the lights, sounds and colour contrast, to bring us this classic tale of a young princess whose future is in doubt.

With an audience already whooping with delight and singing Frozen’s Let It Go, Denise Pearson as Fairy Fancy pumped up the tunes with some Fleetwood Mac and got the goodwill going.

This pantomime has built up a very loyal fanbase, and for good reason, as we indulged once more in The 12 Days of Christmas, with the flying loo rolls, some supersoakers and a bra that could only hold three.

Without spoiling the surprises too much, treats included a bit of a bake-off, a great cruise ship homage of In The Navy, and another Frozen tribute.

Let’s just say it’s not just Mr Blakeley who can pull off a good look in a frock.

As always, the witty comebacks, deadpan prose and audience side-glances from Messrs Blakeley and Cruise won us over, although my favourite retort was from a toddler who, when asked where she came from, simply replied “My mummy” to hoots of laughter.

Also starring Cliff Richard, ahem, sorry, Mike Read, and the timeless Basil “Boom Boom!” Brush, alongside the romance of dulcet-toned Megan Jones and Alex Jordan-Mills, the icing on the cake was Tom Baker as the voice of the Dragon, with Jenny Ryan as the evil Carabosse and some very civilised retribution and tying up of loose ends.

With wonderfully extravagant costumes, colourful and vibrant scenery, energetic dancing and great belters to sing along with — and of course boo, hiss and generally stomp at — this was a winner.