Panto stars are weddy to make the Kenton's great 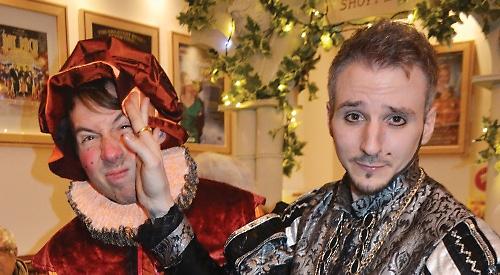 FOR James Tobias Clifford, panto is all about the audience.

The writer and director of this year’s Kenton Theatre pantomime, Robin Hood, which opens next Friday (December 15), is also one of the stars of the show.

You’d expect him to be playing the title role of the dashing outlaw hero, wouldn’t you? But oh no he isn’t!

Instead, he’s cast himself as the dastardly Sheriff of Nottingham.

“I always like my panto villains to be slightly over the top,” says James. “As much for the adults as for the kids — with all our panto villains we should love to hate them rather than genuinely dislike them.”

That shouldn’t be a problem for James who, together with his girlfriend and Immersion Theatre Company producing partner Rochelle Parry, starred in the Kenton’s first three professional pantomimes.

It was during the course of the latter production that James decided to mount a one-man show of his own — commandeering the Kenton’s stage to propose to Rochelle.

“It was the 23rd of December,” he recalls. “Once the show had finished and the audience had left the whole cast and crew were in on it. My mum had come down and I’d arranged for Rochelle’s family to come down as well.

“My mum had distracted her by asking her to go shopping — yeah, very cunning! — and while she was out we were preparing it. So we had candles lit all on the stage and we projected a beautiful sky on to the backdrop, so it was atmospheric.

“Everyone was hiding, so when my mum brought her back, someone from the cast showed her into the auditorium, because everyone else had disappeared, and I was stood on stage with this atmospheric lighting and with the candles, with a guitar.

“Then as she walked up the aisle — quite literally — I started playing a little song that we’ve got together. I got her on to the stage, and then it was a private moment, just between us two, but it meant a lot, and she said ‘Yes’.

“And when she came out everybody came down and surprised her — so that was overwhelming in itself. And then her family came down the stairs and she couldn’t believe it.

“After that we eventually had a big meal out and it was probably one of the most magical nights that either of us have ever had.”

Although the couple have yet to set a date for their wedding, James says they have set their sights on 2019.

“The date is still TBC because of the amount of projects we’ve got on the go. Trying to squeeze the wedding in is quite tricky, but we definitely know that we definitely want to get married in 2019.”

In the meantime, given the history they have with the New Street venue, James and Rochelle are nothing short of delighted to be back at the Kenton.

“In the past Rochelle and I have been at the Kenton in panto as actors, but this is the first time that we as a theatre company, Immersion Theatre, are actually doing the panto.”

The three years since they were last in pantomime at the venue have been good ones. “It’s been great,” says James. “ Essentially we’ve gone from doing Shakespeare and we’ve found our real passion, which is family theatre and pantomime

“That’s where over the last few years we’ve really found what we’re good at, what we love to do, and what we want to focus on primarily. So we now produce theatre tours — we’re coming to Henley again in the spring with The Jungle Book. We do summer open-air musical and we do various pantomimes as well at Christmas.”

Despite their time away, it seems that Henley is very much where the heart is both personally and professionally.

“I want nothing more than to make this our home,” says James. “Like, our second home. And I want the Kenton panto to be a panto that is recognised as much as all the other big pantos are. I think we’re really well placed to work with the theatre to achieve that.

“Not just for Henley — I mean, it is for Henley — but also for the surrounding areas, because they know that the Kenton panto is the one to come to. And that’s what I really want to achieve.

“Yeah, the Kenton might be slightly smaller than some other theatres, but that has nothing to do with the quality of the work that gets put on there.

“And Henley audiences are so upbeat and up for it and enthusiastic. I want nothing more than to see it thrive and if I can help achieve that then, yeah, I’d be very happy.”

In the meantime, as you’d expect, James is focusing all his energies on making Robin Hood a great show.

“My absolute passion in life is our family theatre scripts and panto,” he says. “Because what you can do with it is involve the audience — like nothing else can.

“I love my audience participation and I really like creating family shows that are literally for the entire family — so they’re not just children’s shows. They’re shows that you can enjoy whether you’re three, seven, 15, 25, 60, whatever! You know, they’re for everyone!”

For James, it’s precisely this bid to entertain people of all ages that, when done right, makes pantomime such a sophisticated artform.

“It is! Panto’s got an unfair reputation of being this easy, kind of like, ‘Oh, you know, you phone it in...’ But that is so untrue — certainly the way we work. We drill our casts. The level of energy we require from them is exceptional really.”