Winter of discontent makes for a fun reworking of the nativity 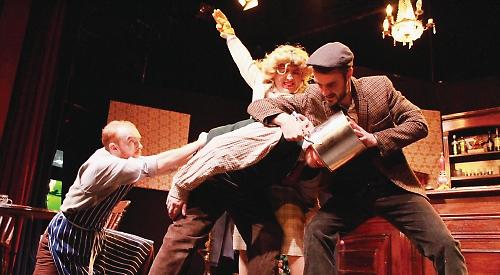 THE entrepreneurial spirit of local impresario Jack Maple — at 22, still the West End’s youngest theatre producer — and this energetic new work by his former Oratory School English teacher Tony Stroker, combined to deliver an engaging Christmas farce at the Kenton Theatre for just two performances this past Sunday.

Clearly drawing on influences of Fawlty Towers and the works of Michael Frayn, a cast of Oratory School friends and graduates of the Italia Conti Academy skilfully reworked an interpretation of the nativity — but not set in Bethlehem, you understand.

Rather, this is a snowy Christmas Eve in the Derbyshire town of Buxton in the Seventies, and an unappealing inn known as The Star Hotel where industrial strikes and the Winter of Discontent lead to power cuts, undelivered food for the pantry, and resulting mayhem. Convening at The Star, not surprisingly at Christmas, are the “angels” in the form of a touring boys’ choir from Düsseldorf, the Shepherd family, and a late-arriving young husband and pregnant wife, known as the Carpenters (Ian Pollington and Zöe Grain). There are, of course, no rooms available at the inn for the latter, so landlord Arthur (Alexander Knott) and his wife Phoebe (Luke Frost) make space by vacating their bedroom to sleep in the annexe.

Sadly, the Kings have got stuck in traffic.

As one would hope with a work of this kind, the enthusiastic young cast dole out the lightning-fast paced comedy with aplomb and director Max Saunders executes with a keen eye.

Knott’s hapless landlord, Arthur, who negotiates countless phone calls from lost hotel guests while simultaneously dealing with endless complaints of those who have already arrived, astounded the audience with his animated and protracted monologues — at one point stirring them into spontaneous applause. In amongst several appropriate nods to the beloved British panto, Luke Frost incited much audience hysteria as Arthur’s stern-faced wife Phoebe, whose intransigence and grouchiness give way to an unpredictable and broody soft touch in the face of a pregnant woman.

Jack Gogarty as grumpy local barfly George, meanwhile, virtually steals the show, from the moment he nabs the very last available pint of bitter from the keg, to his dry and relentless teasing of German choirmaster Herr Engel (Jack Cronin).

Gogarty subsequently brings to life the most poignant moment of the play, as he dreams in his armchair of a return of his late wartime paramour.

A Christmas Tale is slated to tour next year. For more information, visit www.
jackmapleproductions.co.uk