Talented pair are delighted to be performing in pant-o 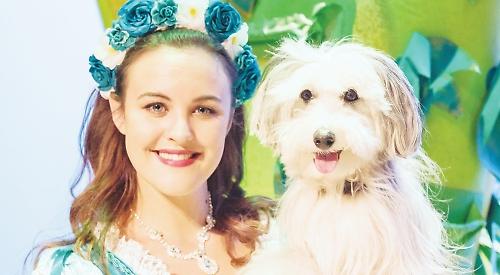 A LITTLE over five years ago Ashleigh Butler and her talented dog Pudsey won the final of Britain’s Got Talent — and the hearts of the British public.

Following their first appearance on the popular ITV teatime show, Simon Cowell said: “Pudsey is one of the best dancing dogs I’ve ever seen.”

The rest of the country clearly agreed, and later that year Ashleigh and Pudsey performed at Epsom racecourse as part of the Queen’s diamond jubilee celebrations.

Their success on Britain’s Got Talent was followed by the publication of Pudsey: My Autobidography and a light-hearted comedy film, Pudsey the Dog: The Movie.

The pair also appeared on numerous TV programmes and in panto every Christmas — where they were later joined by Ashleigh’s other trained dog, Sully.

Sadly, in July this year, 11-year-old Pudsey was diagnosed with acute canine leukaemia and Ashleigh had to take the heartbreaking decision to have him put to sleep.

She later announced that Sully would appear with her at future events but insisted that he would “never become Pudsey”.

Ordered by Dame Trot to sell his trusty cow, Jack fights to save the beautiful princess, outwit the evil giant and win riches beyond his wildest dreams — not to mention the hand of the girl he loves.

There’s also a magical 3D sequence, the beanstalk itself and a hungry giant to look forward to.

For Ashleigh, now something of a panto veteran, the show promises to be a big dose of fee-fi-fo-fun — and there is no doubting how far she has come since she first started training dogs at the age of five.

“My mum was training dogs and riding horses from the age of 13 and I was fortunate in having her to teach me from an early age,” says Ashleigh. “I got Pudsey when I was 11. He was the first dog that I trained and it all took off from there.”

Born and raised in Wellingborough, Northamptonshire, Ashleigh went to the Wrenn School as a teenager. But even at a young age she had a clear idea of what she wanted to do.

“I completed sixth form, then dropped out to take part in Britain’s Got Talent as it was a once in a lifetime opportunity,” she says.

Their audition for the sixth series of the show was held in Cardiff and broadcast on April 7, 2012.

They danced to the Flintstones soundtrack where they received a standing ovation from the audience and judges and went through to the next round.

Competing in the first semi-final a month later, they were voted through to the final by the public after performing a routine based around the Mission Impossible theme. This saw Pudsey walking across the judging panel, then climbing on to Ashleigh’s back.

Dog lover Simon Cowell was especially enthusiastic about their act. But what is he like to work with?

He’s genuinely a lovely person and extremely considerate,” says Ashleigh. “He took Pudsey and me to America on his private jet as he knew that flying on a commercial plane would have meant Pudsey having to travel in the hold of the aircraft, as he was too big to go in the cabin.

“Simon also arranged for us to go on The Tonight Show with Jay Leno, as well as America’s Got Talent and Good Morning America.” But even those showbiz highlights paled when compared to performing for and subsequently meeting the Queen in November that year.

“It was an amazing experience and something I will never forget” says Ashleigh. “Pudsey touched so many people’s lives. The Kennel Club told me that they have had many young people contacting them about training their dogs after seeing Pudsey on Britain’s Got Talent.”

As well as Sully, Ashleigh’s mum’s dog Eliza will be performing a routine in Jack and the Beanstalk.

“I will have two dogs on stage with me, which I am looking forward to,” says Ashleigh. “I love taking part in pantos and Jack and the Beanstalk is my sixth one. I enjoy seeing children with their families having a good time and pantos are great all-round family entertainment.

Crufts agility champion Sully made his pantomime debut last year in Northampton alongside Ashleigh and Pudsey.

Says Ashleigh: “Training and performing with dogs is my life, despite my heartbreak at losing Pudsey. It hurts so much to think that my handsome, incredible Pudsey Bear will never be by my side again.

“We only had 11 years together, but they were the best years ever. He was my one in a billion dog that will never be replaced. However, Sully is turning into a star performer and is very popular with audiences.”

Talking about her parents Penny and Ian’s role in her success, Ashleigh says: “They have been very supportive throughout my career and helped me when I was competing in Britain’s Got Talent.

“It’s a daunting experience when you’re only 16. They figure out what’s best in whatever I do and always help me to make the right decisions.

“I have taken my act to America and Germany, although I’m not a massive fan of flying as it requires keeping Sully in the hold of the aircraft, which I’m not keen on doing.”

What plans does she have for the future? “I would love to get into TV presenting. I have done some presenting and I would like to focus on that. For now, I enjoy doing pantos and consider myself very lucky that Pudsey gave me that opportunity!”

• Jack and the Beanstalk is playing until Sunday, December 31. For tickets and times, call the Wycombe Swan box office on 01494 512000 or visit www.wycombeswan.co.uk