Panto pulls out all the stops 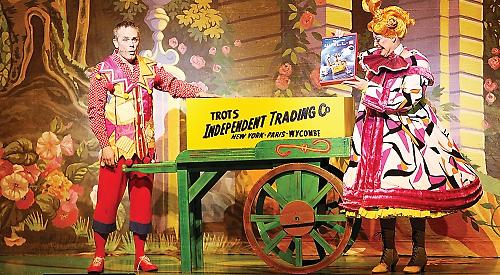 WELL, the Wycombe Swan has certainly pulled out all the stops this year. There are pyrotechnics, dancing dogs, 3D dramatised action, streamers, pop stars and Trump references aplenty.

The production values were phenomenal. There were colourful, mystical and magical settings galore. The inflatable beanstalk was very effective and scene changes clean and the costumes were flamboyant and fun.

Dame Trott’s wardrobe was certainly a highlight, with tropical prints, emojis, baked beans — a truly bizarre mix but they all worked so well.

My only criticism would be that I felt the Princess could have done with something a bit more, as she seemed to blend with the ensemble at times.

But talking of the Princess, what a revelation. I knew that Ashleigh could dance from performances with her four-legged friends and as the worthy winner of Britain’s Got Talent, but she was highly engaging in this role, with a considered performance and beautiful voice to add into the mix.

The aforementioned Dame was also spectacular. Nigel Ellacott has worked for this company for 35 years and has definitely found his calling. He was charming, lively, sarcastic and borderline offensive but in the perfect Dame-like way.

Chris Jarvis was superb. He both performed in and directed the show. He was engaging and energetic, his impressions were amazing and the audience loved him.

Jo Parsons as Fleshcreep was captivating, with a powerful vocal and strong interactions with the audience. His number after the interval was a highlight for me and I would love to see him perform again. The ensemble were strong with some great choreography and the small team from Jackie Palmer Stage School were delightful. It was fantastic to see children so comfortable and well rehearsed.

This was the first show I have seen to introduce a 3D animated section. The audience donned their specs as they approached the giant. This was very cleverly and professionally done and added something a bit different.

My main disappointment was with Jack. I understand that “celebrities” bring in an audience but I didn’t feel that Simon Webbe was particularly comfortable or even enjoying the role.

The Spirit of the Beans (Leah Godbold) also lacked a bit of energy for me and sadly, as I have found with a couple of shows at the Swan, her vocals were drowned out at times, which was a shame.

I could have also done without the powerful blinders — the lighting plot in general was brilliant but they were actually uncomfortable on occasions.

If you want a big, bold evening of all-around family entertainment then you will not be disappointed. There is something for all generations to enjoy.