World of sound and colour is Pan-tastic 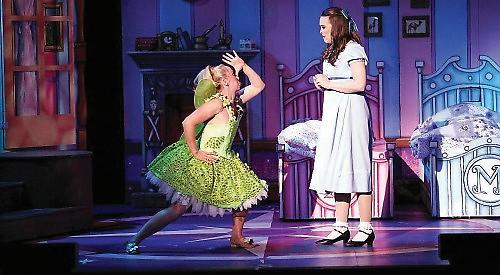 WITH plenty of hearrrty pirate jokes, cutlasses and the punderful shoehorn of “Nanny McSmee” we experienced a joyous explosion of panto sound and colour at the Hexagon.

From the upbeat and delirious Colour My World through to Rhythm of the Night, there were lots of highly contagious tunes.

We joined Peter Pan, Smee and his mum, the aforementioned Nanny, along with Wendy, Michael and John, a jovial yet petulant Tinker Bell and their friends as they fought against the ominous Hook.

TV’s much-loved Justin Fletcher as Smee and multiple “Best Dame” winner Paul Morse as Nanny brought us uproar, slapstick, pies in the face and the traditional audience super-soaking — this time with super-soakers so large my elder son wanted to get one for Christmas, while my younger son actually hid under his coat.

Although this was on a big stage with a large audience, the whole thing felt quite intimate, cosy and friendly, with plenty of interaction and jibes.

Smee and Nanny managed a nice balance between happy, chirpy stuff for the kids and the requisite jab in the ribs to the grown-ups.

With fabulous costumes and props as always, the sea scenes, boats and crocodile were marvellous, while there was plenty of magical singing, dancing and all-round sparkles.

At the end Justin thanked the crowd and said the cast members were all very grateful for the warm reception they had received — and the feeling was mutual.