Variety's the spice of life. Twice! 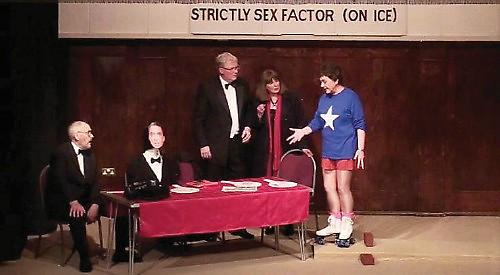 THIS year saw the Shiplake and Dunsden Dramatic Organisation (SHADDO) branch out from its annual pantomime to deliver a variety “Cabaret” show in September and by popular demand another in November, showcasing the wonderful array of talent the troupe has to offer — an evening of comedy, magic, music and poetry.

The only way to get things back on track is to look to the TV shows which receive the highest ratings and add a “Little Grimley” twist.

Thus the farcical title of the play is born.

Needless to say, things do not turn out as they all planned! The talented quartet brought this script to life, with some wickedly hilarious moments and perfect comedic timing.

The second half of the evening was a wonderful variety of magic, poetry, music and comedy. First up, Sid the Spiv, played by Rod Type, transported us back to wartime London, bamboozling us with some brilliant magic.

Nigel Piercey followed, delivering an emotive and moving rendition of The Man from Snowy River by Australian poet and writer Banjo Patterson.

The whirlwind of variety continued, taking us to China with Ricky Knights performing a memorable and heart-warming rendition of the Chinese opera Red Lantern.

A foray into fiddling followed, with Peter Crowther “scrapin’ the ol’ cat gut” and performing some upbeat tunes with his trusty fiddle.

The comic poem I Wanted to be an Actress — a frustrated career read by Becky Ilderton — rounded off this section of the evening with an amusing insight into the potential pitfalls of the world of acting and the perpetual wait for a “lucky break”. The evening climaxed with a musical bonanza by the SHADDO supergroup, comprised of Allen Appleby, Emma Piercey-Fisher, Hilary Tucker, Neil McAdam, Pip Collings, and Rebecca Strong.

Down to the River to Pray, Wonderwall, St Peter and Is This the Way to Sunny Shiplake were performed beautifully with interwoven harmonies and palpable energy and had the audience singing in their seats.

No production could be delivered without the dedication and hard work of the team behind the scenes. A huge amount of effort went into this event and it certainly paid off with the aforementioned demand for a repeat performance!

Next up, the SHADDO panto production of Alice in Wonderland on January 25, 26 and 27. Advance tickets will be available after Christmas from the Shiplake and Binfield Heath village shops, or by emailing SHADDO secretary Pip Collings on pipcollings3@outlook.com

PS Tickets will also be available on the door. See you there!