'Mad and merry' panto has something for everyone 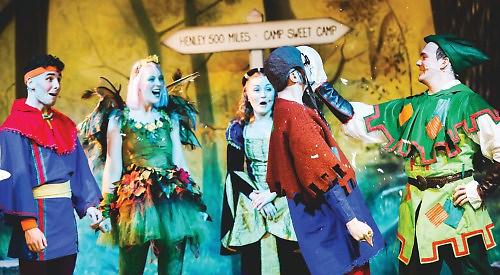 THIS year’s professional panto in Henley is a fast and furious romp through Sherwood Forest and into the castle of the dastardly Sheriff of Nottingham.

Written and directed by James Tobias, it is a tight and well constructed performance that feels very much at home at the Kenton Theatre.

There is only a cast of seven, but there is no chink in their armoury of talent.

Evan Sutton, in his first professional role, is extremely comfortable on stage and played the heroic outlaw with unflinching energy and a Cheshire Cat grin.

Rebecca Botterill, as the beautiful Maid Marion, sang excellently and survived kidnapping and a near forced marriage with astonishing calmness.

James Clifford and Rochelle Parry are no strangers to the Kenton, having appeared in three previous panto productions, even getting engaged during the course of the last one.

James played the iniquitous and villainous Sheriff of Nottingham splendidly, showing the character’s lesser known trait of cross-dressing, and an unexpected penchant for shiny trousers and dance music.

Rochelle’s fairy was not a traditional pantomime fairy who whooshes on and off the stage to the sound of tinkly bells, but very much a part of the action and inexplicably part of the gang of Merry Men. Inexplicable isn’t always a bad thing though, as Parry did more to guide Robin to love and victory than deliver rhyming monologues from down stage left.

Parry was undoubtedly my son’s favourite cast member, and triple-threated her way through the performance to eventually rustle up some magic that solved a problem like the sheriff — an action she could conceivably have done at the start, but that would have made for a rather dull show.

Thomas Cove was for me the star of the show, as his Friar Tuck bounced joyfully at Robin’s side delivering jokes like machine gun fire and showing off a spectacular singing voice.

Dan Dawes played a wonderfully buffonic and ingratiating sidekick to the sheriff before inevitably switching sides — but not before taking part in the sheriff’s impossibly implausible attempts to capture Robin and the Merry Men.

Special mention must go to Danny Chesworth, also in his first professional role, who played the part of “Ensemble Number One” (of one) brilliantly. With only one or two words in the script, he was still a vital part of the production and a joy to watch on the stage. My only slight disappointment was the music, which was sadly on track and often so loud that it drowned out the players, especially during underscoring. Live musicians bring theatre alive where, sadly, synthesised ones do not. But that certainly didn’t bring down my enjoyment levels too much, and the sound operator was bang on the money with the special effects.

There wasn’t a huge amount of dancing, but when it occurred it was clever and tight and a credit to the choreographer, Chris Whittaker. The lighting was effective, but with seemingly no haze to wash the stage at this performance, perhaps a little stark.

All in all, this is a fabulous production, with everything you would expect from a pantomime and more.

The jokes came thick and fast and were often terrible (no, really terrible), and what the Kenton lacks in fancy equipment and gadgetry was more than made up for by the performances of the cast.

It truly is a family pantomime, suitable for young and old alike, and as the poster suggests, it is mad and merry. Oh no it’s not. Oh yes it is...