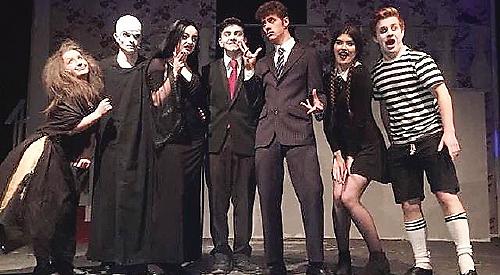 EVERY year, students are invited to become part of The Henley College Theatre Company, which stages a production each December.

Based on the characters created by legendary New Yorker cartoonist Charles Addams and billed as “a new musical comedy”, The Addams Family was this year’s show — featuring the endearingly weird and wonderful likes of Gomez, Morticia, Wednesday, Pugsley and Uncle Fester.

This was one of the strongest Henley College productions I have seen. I was so impressed by the characterisations and there was no weak link.

Across the board everyone had considered their accent, stance and stayed true to their character throughout.

I saw the show at which the understudies performed, which suggests Henley has some serious talent this year.

Gomez, played by Oscar Hogg-Gomez — fittingly! — was a joy to watch. This debonair character has a tricky accent, but in Oscar’s dialogue it appeared effortless.

He was very natural in his character and had perfect comic timing and related to the audience well.

Eleanor Malaprade as Morticia had a stunning vocal, although appeared to lack confidence in her movement and dance. She certainly looked the part as the infamous witch, but I wished she had stood taller and owned the stage a little more.

Bethany Senda had a killer voice and killer death-stare as Wednesday. The character has always been a favourite of mine since watching the TV show and Bethany did not disappoint in her portrayal.

Sam Burton-Harris as Fester was really something special and I am excited to see where he goes after The Henley College. In this production he headed to the moon, which I hope is symbolic of his career.

Every member of the cast and dance crew impressed me. The Addams Family is a tricky production to stage but the college team did it so well.

My only criticism was the lack of a live band. The backing tracks meant the show lacked pace and the energy and vibe that a live band creates; I find a musical without musicians a rather sad situation.

Other than that personal heartbreak, it was a great production. Well done, The Henley College.