'I feel like I'm destined to play Boris Johnson...' 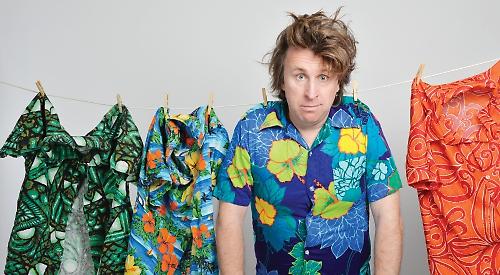 “PEOPLE have said to me, ‘On one level it’s quite clever, and on another level it’s not clever at all,’” says Milton Jones, analysing his own comedy.

“I think that’s a compliment,” he laughs. “I’m not sure. You could take it either way.”

Over the past 20 years Jones has established himself as the master of one-liners. The professor of puns. The king of the zingers. And nonsense has always played a crucial role in his streams of non-sequiturs.

Put those alongside his beautifully constructed pieces of wordplay, and it’s helped the 52-year-old stand-up stand out among the T-shirt and
suit-wearing comics on Mock the Week, on which Jones has been a regular since 2009.

But in his new touring show — “Milton Jones is Out There” — we see Jones questioning the importance of his own nonsense in our increasingly divided times.

Does that mean we could see an end to his trademark silliness and pun-foolery? Answer: absolutely not.

The blurb for the new show talks about Jones “running for prime minister” and having a “manifesto of nonsense”. But what else can he tell us about it?

“As well as me doing loads of trademark jokes and little sketchy pieces, the show sees me thinking, with all that’s going on in the world, maybe I should be doing something more serious rather than talking nonsense. I seem to have a crisis of confidence in terms of: is nonsense of any value? And of course that results in more nonsense rather than less.”

Is the show very political in terms of opinions or content? “Not really. It’s all fairly jokey. There is one pseudo-political joke, which is as near as I get. With my stuff, people remember the joke rather than the point. Though my aim with the tour is to add in a couple of moments of pathos, really questioning whether I’m on the right track.”

Is it difficult to mould a show in that way, to include a message and a narrative via lots of one-liners? “Yes, it is. I end up with a massive bag of jokes which probably don’t fit, which is really annoying.”

The Milton Jones you see on stage is, of course, a persona, which adds another filter for any opinions that may be expressed. The character on stage is just that — a character — though Jones doesn’t specifically say as much. Is that deliberate?

“No! I think if I was starting again I would give him a name. He evolved as I tried out things — he was working so I stuck with it. But there are levels to him. I can pull things back and talk about my real life, to some degree.”

What are the key differences between the persona and the real Milton Jones?

“I think most comics are accentuated versions of themselves, to some degree. I am, apparently, quite clumsy and I don’t approach things particularly rationally. I quite often see the other side of things. The differences are, hopefully, I’m not socially obtuse! I’m quite conventional — I’m married, I have three kids, a house — so it’s almost an escape from normality. I don’t have to be responsible. I don’t have to pay car tax.”

The on-stage Milton has a distinct look: the hair and the shirts. Is it important for him to be visually distinctive?

“I didn’t set out to do it, but it’s been useful ‘branding’. If you don’t remember the name you go, ‘Oh, that guy with the shirts and the hair.’ Originally the whole idea was that it was a signpost to say where I was coming from — it was leftfield.”

How easy is it to find the right kind of shirt? “It’s quite hard. It can’t be ‘wacky’ in a stag night way. It needs to be more, just ‘... No’. There has to just be a bit too much brown in it or something.”

The shirts certainly make an impression on Mock the Week, where Jones has become a popular fixture.

“I was on recently and I was the third oldest person there in terms of appearances. It felt quite odd. I think the BBC now uses Mock the Week to try people out, and it means there’s a whole new batch of people coming through, which is great. I feel like a senior statesman.”

Has that changed the tone of the programme? “The new lot all know each other, so I think it’s less competitive than it used to be. There’s more teamwork. It’s a more pleasant show to do.”

How does he prepare for an episode? “Basically, you’re covering all the subjects in the news that haven’t got someone dying in them, so I go through my arsenal. A lot of people think it’s a satire show, but it’s not, it’s a joke show — which suits me.”

A joke Jones performed on Mock the Week has proved the inspiration for a forthcoming show about a certain former Henley MP.

“Yes, about Boris Johnson. ‘An idiot with stupid hair running the country?’ Bing! That’s where it started. I feel like I’m destined to play Boris Johnson at some point.” That’ll be the day. But does Jones find he has to adapt his style much between appearing on, say, Radio 4 and Mock the Week?

“Very generally, the Mock the Week audience is more student-y, whereas Radio 4 the average age is 54 or something ridiculous. So you can put in references for Radio 4 that I wouldn’t bother with on Mock the Week. And conversely, popular music references can go into Mock the Week.”

Jones has had many of his own series on Radio 4, but is his own TV series something he’s working towards?

“I’ve had three or four scripts that have come close. Who knows the truth of why these don’t happen. You get told one thing and whether it’s actually true, you don’t know. One day hopefully we’ll be in the right place at the right time and we’ll make it work.”

Through writing scripts, does Jones tend to generate much material that can be used elsewhere? “Very much so. Fortunately, I’ve done so many scripts now that if I think a subject’s coming up on Mock the Week I can put a key word into my material file.”

The late Bob Monkhouse famously kept his “life’s work” — including all his jokes and ideas for sketches and plays — in two thickly bound maroon books that at one point went missing but were later returned to him.

It turns out that Jones has something similar, albeit on his hard drive. “I have an ‘all my material’ file on my computer, yes. You’ve got to wade through it, but it’s worth it because there’s loads of stuff in there I’ve forgotten off the top of my head.”

Is there a particular formula to a Milton Jones joke? “I was never good at maths, but there is a mathematics to it. It’s like balancing equations. There’s an ideal format, and yes it can work the other way round, but it’s not quite as elegant. It’s about getting the joke down to the lowest form of words, the minimal effort. That’s what really adds beauty to it.”

• Milton Jones is Out There is touring to the Reading Hexagon on Wednesday, February 28, and the Wycombe Swan on Sunday, March 11. For more information and to book tickets, visit www.miltonjones.com