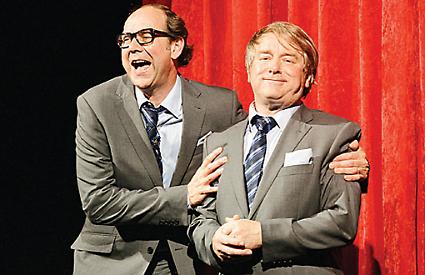 A SHOW recreating the comedy genius of Morecambe and Wise comes to the Theatre Royal Windsor in March.

Eric and Little Ern was a hit at last year’s Edinburgh Fringe Festival, during which it was featured on ITV’s News At Ten as well as winning rave reviews and playing to sell-out crowds. It later transferred to the West End.

The show, created and performed by Ian Ashpitel and Jonty Stephens, recreates some of the best-known moments of Eric and Ernie’s television and stage performances alongside new material. This newly-extended version features the original Grieg Piano Concerto sketch and Eric’s take on Shakespeare.

The show runs at the Theatre Royal Windsor from Thursday, March 13 to Saturday, March 15. Box office 01753 853888 or visit www.theatreroyalwindsor.co.uk