Panto characters are seizing their moment 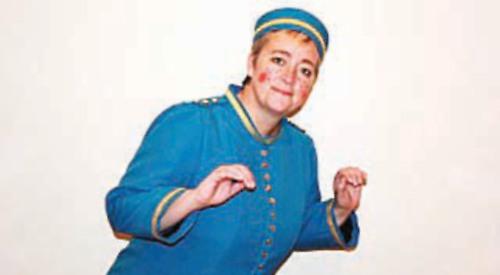 PANTO season may have drawn to a close in Henley, but elsewhere it is just getting started.

The Market Place venue is relaunching itself by hosting a gala performance of the Sinodun Players’ rock’n’roll take on Cinderella.

Director Marilyn Johnstone and her cast and crew are promising a high-octane show full of colour and larger than life panto characters such as the Ugly Sisters, Baron Hardup and Cinders herself.

Fiona said: “We’re very excited to be bringing a rock and roll pantomime to the Corn Exchange, which is looking wonderful. It’s exciting, different and should be a huge hit with all the family.”

The pantomime — which is the Sinodun Players’ 70th — will be the first show staged at the Corn Exchange since the work on the roof, heating and ventilation system was completed.

The refurbishment project remains ongoing and £150,000 is still needed to complete it.

Oliver Hemmings, chairman of Corn Exchange Wallingford Ltd, said: “The work undertaken so far has cost over £650,000 — for which we are grateful to our sponsors, including South Oxfordshire District Council. We’ve also done some work in the auditorium, but there's lots more to do — which is why we need another £150,000.”

Those attending tonight’s gala performance are invited to dress as if they are attending the ball with Cinders. The ticket price includes a glass of sparkling wine or a soft drink, canapés and a complimentary copy of the programme. The show starts at 7.30pm and runs for 150 minutes.

Cinderella runs until Saturday, January 27, and already the matinée performances have sold out.

Ticket prices vary by performance. For more information and to book, call (01491) 825000 or visit www.cornexchange.org.uk

Down the road in Woodcote, the village’s amateur dramatic society will be performing a panto with a difference later this month.

Hans Christian Andersen’s tale of The Emperor’s New Clothes is playing at the village hall from Saturday, January 27, to Saturday, February 3.

The Emperor is so exceedingly fond of new clothes that he spends all his money on being well dressed.

He cares nothing about reviewing his soldiers, going to the theatre or going for a ride in his carriage — except to show off his new clothes.

He has an outfit for every hour of the day.

However, the Emperor is also running out of cash and demands that his son marries into money to keep him in the lifestyle to which he has become accustomed.

Alas, the options are not all they seem...

For tickets and times, call (01491) 680573, email
wadsboxoffice@gmail.com or visit the group’s website at www.woodcotedrama.co.uk